Taylor Swift wore her signature color and belted into matching microphone for a performance at London's Westfield Shopping Centre, which occurred just after learning that her album Red debuted at number one in the UK, her first record ever to do so. "I had hoped that my fans would get what I was doing—that they would embrace it," Swift told the audience gathered at the event. "And the fact that they celebrated that and it became my first U.K. No. 1 album—it is absolutely unbelievable." Click through to see more stars at this week's biggest parties. 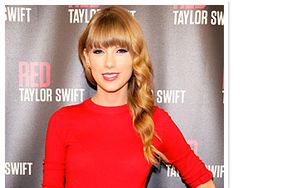