A Complete Timeline of Taylor Swift and Joe Alwyn's Relationship

What, did anyone still think it was a secret?

Even though Taylor Swift has rarely spoken about her relationship with British actor Joe Alwyn, her fans (and just about everyone else) certainly think that they are together. It's a full 180 from her days of dating Tom Hiddleston and Calvin Harris, where PDA made headlines and social media posts were the norm.

But while the spotlight is now focused on Swift's work, her relationship with Alwyn has still been the subject of speculation since the two were first spotted together. Over the last few years, fans have dissected Swift's lyrics for any details and watched Miss Americana frame-by-frame to catch a glimpse of him. And more recently, Swift has begun to open up a little more about their relationship in songs and interviews — and Alwyn has even helped her pen some of her latest hits.

Here's everything we know, from their maybe-meet-cute at the Met Gala to their almost-public awards show appearances.

Many fans believe that Swift and Alwyn met at the 2016 Met Gala. Why? Her song "Dress" has the lyrics "Flashback when you met me / Your buzz cut and my hair bleached." Swift was dating Calvin Harris at the time.

There's still nothing official, but fans notice that Swift and Alwyn were both at the same NYC Kings of Leon concert and the after-party at the Bowery Hotel.

Swift attends the premiere of Billy Lynn's Long Halftime Walk. Alywn features in the film, but there's no proof that they hung out together at the event.

The rumors start to intensify. Most of Swift's fans aren't familiar with Alwyn, but he has two huge projects in the works: The Favourite and Mary Queen of Scots. Up until this point, Swift's relationships were all high-profile (see: Joe Jonas, Calvin Harris, Tom Hiddleston). That was about to change.

"Taylor and Joe are the real deal, this is a very serious relationship," The Sun reported. "But after what happened with Tom Hiddleston, they were determined to keep it quiet."

Alwyn and Swift are caught by the paparazzi for the very first time. Once, in Nashville and, a month later, in NYC.

Taylor Swift and Joe Alwyn Aren't Holding Back the PDA

The couple engages in some very public PDA at iHeartRadio’s Jingle Ball in New York City. It all goes down during Ed Sheeran's set. Apparently, Sheeran and Alwyn are pals. The Daily Mail reported that Sheeran said that Alwyn was "really, really friendly; really good dude."

Rumors emerge that the pair has moved in together.

They're together, but not really. Swift and Alwyn post snapshots by the same cactus while on vacation.

Swift finally opens up about her relationship, telling British Vogue, "I'm aware people want to know about that side of things. I think we have been successfully very private and that has now sunk in for people ... but I really prefer to talk about work."

Alywn commends Swift's political endorsements, saying, "I think it’s great, and I think it’s important." She endorsed two Tennessee congressional candidates after staying out of politics for her entire career.

Swift attends the Leicester premiere of Mary Queen of Scots.

The Favourite is an awards-season, ahem, favorite. Swift and Alwyn hit up the Golden Globes after-parties together.

Swift attends the BAFTAs with Alwyn, where they're spotted holding hands. The two also attend the Oscars after-parties together.

The couple sit down for a double date with Robert Pattinson and Suki Waterhouse in Paris.

Swift's fans comb the song "Lover" for any clues. "I've loved you three summers now, honey, but I want 'em all" and even "Ladies and gentlemen, will you please stand? / With every guitar string scar on my hand / I take this magnetic force of a man to be my lover" are enough for them to speculate about wedding vows.

Alwyn and Swift are seen at SNL after-parties after she performs on the show.

Alwyn speaks about the relationship during a sit-down with the Sunday Times, saying that 99% of the news about him and Swift is untrue.

"I just don’t pay attention to what I don't want to pay attention to," he said. “I turn everything else down on a dial. I don’t have any interest in tabloids. I know what I want to do, and that's this, and that’s what I am doing."

He later attends the premiere of her film Cats.

Swift opens up about their relationship in her Netflix documentary, Miss Americana, saying that she was drawn to Alwyn's "wonderful, normal, balanced kind of life." Though he is not named, fans spot a glimpse of him in one of the scenes from backstage at her show.

Later that month, they attend the Golden Globes and even sit together, even going so far as holding hands and kissing.

A month later, they're seen getting cozy at the NME Awards. Swift takes home the trophy for Best Solo Act.

Swift opens up (slightly) about their relationship and reveals that Alwyn wrote two songs on her album, folklore.

"Joe plays piano beautifully. He's always just playing and making things up and kind of creating things. Joe had written that entire piano part," she says about the song 'Exile.' "He was singing the Bon Iver part, the 'I can see you standing honey, with his arms around your body, laughing but the joke's not funny at all.' He was just singing it. And I was entranced and asked if we could keep writing that one."

Swift's album evermore is released, sparking a flurry of rumors about their possible wedding as fans dug for more tidbits about their relationship.

Swift also told fans in a YouTube chat before the album's release that she worked with William Bowery (Alwyn's pen name) on three evermore songs, which were revealed to be "Champagne Problems," "Coney Island," and the title track, "Evermore."

And while fans have speculated, thanks to the wedding-style dress Swift wore in the music video for "Willow," that Swift and Alwyn secretly got married, nothing has been confirmed. The MailOnline asked Alwyn's parents about the rumors, to which they responded, "I'm sorry, I'm not going to say anything."

A source reveals that the couple is "in it for the long haul."

"Taylor has gotten more and more comfortable being public with Joe and letting fans in on their romance in a way that she feels is still protecting it," the insider told Entertainment Tonight. "She loves Joe so much and, of course, is not trying to hide their relationship, but she prefers to keep specific details private."

"Taylor and Joe are in it for the long haul and totally see a future with each other," the source continued. "They don’t need outside praise or attention and are so fulfilled just being with each other and growing together as a couple."

Swift thanked Alwyn during her Album of the Year Grammy acceptance speech. Later, she shared a photo of herself with her folklore team and Alwyn liked the photo.

"Joe, who is the first person that I play every single song that I write, and I had the best time writing songs with you in quarantine," Swift said after she accepted her award. 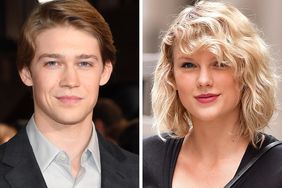 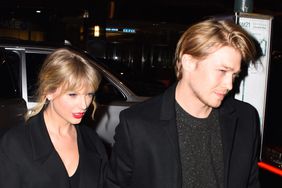