Still stuffed from your T-day feast? Enjoy your vacation (and the tryptophan) just a little bit longer because there’s still so much good TV to watch! Tune in as your favorite Sunday night shows return tonight with all-new episodes. From the Enchanted Forest to the CIA, scroll down for a sneak peak at all the drama on Once Upon A Time, Revenge, The Good Wife, Homeland, and Boardwalk Empire.

Once Upon A Time (8/7c on ABC)Emma and Mary Margaret finally have the magic compass, but they’re about to realize that it’s going to be just as difficult keeping it from Cora as it was getting it from the Giant in the first place.

Revenge (9/8c on ABC)Meanwhile, in Fairytale land… wait, that’s not the evil queen, it’s Victoria Grayson starring into her own mirror-mirror on the wall. Eternal youth? Not a chance. Victoria’s wishing for something much more devious.

The Good Wife (9:30 p.m. EST on CBS)If having one mother at the table was difficult enough for you this Thanksgiving, try having two. We’re thinking Alicia (Julianna Margulies) is going to need more than a glass of wine to survive when both of her and Peter’s mothers pay them a visit.

Homeland (10 p.m. EST on Showtime)Last week's episode ended with Brody face-to-face with Abu Nazir once again! From the looks of things, he’ll be back in play soon, but which side will he be on? We can’t wait to see what shakes down.

Boardwalk Empire (9 p.m. EST on HBO)Things are about to get even more complicated for Gillian (Gretchen Mol). On tonight’s all-new episode, Gillian is forced to consider doing business with as unsavory partner. Gyp? Nucky? Tune in to see who it is!

Plus, see all of our top TV news!

MORE:• All the Fashion from Good Wife Season 4• Catching Up With Revenge's Josh Bowman• Jennifer Morrison's OUAT Jacket of Choice 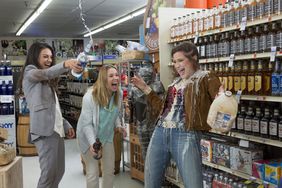 Moms Are About to Go Buck Wild