What makes one truly unforgettable party?

Is it good drinks? One stellar DJ? Plenty of red carpet fashion moments? To us, it's all about the guest list, which is why the InStyle Awards 2017 proved to be the hottest celebration of the week. On Monday evening, we gathered fashion's best to honor each of their accomplishments. Elle Fanning, Brie Larson, Zendaya, and more stars came together at L.A.'s Getty Center—also where Selena Gomez and Demi Lovato shared one epic camera-ready reunion. It was one spectacular evening, and if you haven't had enough, relive it all right here.

Later in the week, Bella Hadid and Lily Aldridge dressed to the nines for Bulgari's celebration of its New York City Fifth Avenue flagship. Isn't it always a party when Bella's there?

When it comes to Hollywood BFFs, some of our favorites are Eva Longoria and Victoria Beckham. The dynamic duo joined forces to celebrate go-to hairstylist Ken Paves and his new salon. Victoria's husband David popped in for a visit, and the married couple posed for one epic photo.

Karl Lagerfeld was also the guest of honor at several Manhattan events this week, drawing everyone from Lily-Rose Depp to Mariah Carey and Naomi Campbell. It doesn't get any more fabulous than that.

Scroll down to see the best parties of the week.

at a dinner in celebration of Pierpaolo Piccioli, InStyle Awards 2017 Designer of the Year honoree.

at a dinner in celebration of Pierpaolo Piccioli, InStyle Awards 2017 Designer of the Year honoree.

at a party celebrating Bumble Bizz.

at the grand opening of the new Ken Paves Salon.

at the grand opening of the new Ken Paves Salon.

at a party celebrating VLTN's pop-ups.

at a dinner in celebration of John Hardy.

at a dinner in celebration of Karl Lagerfeld.

at a dinner in celebration of Karl Lagerfeld.

at a party celebrating 40 years of American Eagle at the new N.Y.C. AE Studio.

at a party celebrating 40 years of American Eagle at the new N.Y.C. AE Studio. 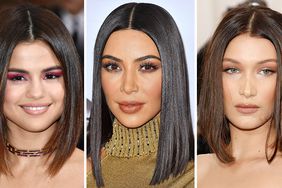