Yes, the 1990s have made a comeback! 2013 was filled with nostalgic moments from the pre-millennial period—crop tops, acid-wash shorts, bucket hats, the Backstreet Boys and New Kids on the Block on tour, so much grunge, and Herbal Essences. We saw it all over the spring 2014 runways, as brands like Saint Laurent and Alexander Wang were clearly inspired by the time period that gave us Clueless and the Spice Girls. Reinventing specific styles, like mules, overalls, and the blatant logomania that once defined the decade, these runway looks were far from copies, giving the just-forgotten trends their own 21st-century spin. All this reminiscing has us wondering what's next! Sisqó? How about burgundy lips, a Kate Moss and Johnny Depp reunion, designer Todd Oldham, and Daria? MORE:• ’90s Fashion Star Todd Oldham on Designing for Kids• The ’90s Flashback We Had at New York Fashion Week• Having a Moment: the 1990s 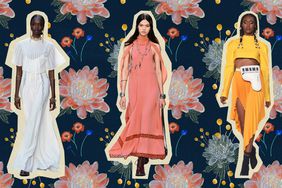