Simone Biles Has Spoken Out Following Her Brother's Arrest

Olympic champion Simone Biles has released a statement after her brother was arrested on triple-murder charges last week.

In a tweet on Monday evening, she told fans that she was "still having a hard time processing last week's news." She wrote in a statement on a Notes app, "My heart aches for everyone involved, especially for the victims and their families. There is nothing that I can say that will heal anyone's pain, but I do want to express my sincere condolences to everyone affected by this terrible tragedy."

"I ask everyone to please respect my family's privacy as we deal with our pain," she concluded her statement. "XO."

Last week, her brother Tevin Biles-Thomas, 24, was arrested and charger with murder, voluntary manslaughter, felonious assault, and perjury, in connection to a New Year’s Eve shooting that left three dead at an Airbnb party in Cleveland. As of Friday, he was being held in the Liberty County, Georgia Jail until his Sept. 13 arraignment in Cuyahoga County Common Pleas Court.

Hours after the news broke, Simone, 22, tweeted, “Eating my feelings don’t talk to me," while fans rallied to support her on Twitter.

In a statement to People at the time, USA Gymnastics said, “In this challenging time for Simone Biles and her family, USA Gymnastics offers our continued support to Simone, her family and her gymnastics family. This is a very personal and private situation for the Biles family and we will respect their privacy and hope others will do the same.” 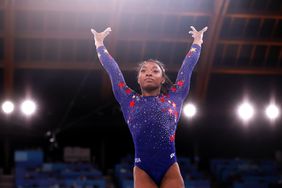