Are TikTok Teens Responsible for the Great Sewing Machine Shortage of 2020?

What started as an errand to JoAnn's for a machine ended in a Craigslist bidding war.

The sun was setting over central Jersey — where I’ve been riding out the pandemic — when my boyfriend and I pulled off the two-lane highway to pick up a couple of “FREE” dirt-stained Ikea bucket chairs from someone’s well-manicured front lawn. Slightly tipsy from our socially-distanced, riverside dinner-and-drinks (emphasis on the drinks, but don’t worry, I wasn’t driving), I romanticized about a future self sitting at the dining room table with a sewing machine and yards of swishy velvet fabric, breathing new life into the dingey white chairs whose stuffing was exploding at the seams; this craftier self, I imagined, would whip the scraps into a square-neck slip dress that I would one day sell on Etsy, labeling the style, “the Winona,” and my upholstery/dress-making empire would only grow from there. Thus, we chucked the chairs into the bed of the pickup truck and were ushered home by the glow of fireflies illuminating the corn fields.

High off my gypsy dream of living a barefoot, furniture-picking lifestyle in the countryside, I went to pick up a sewing machine at my local JoAnn’s. To my (hungover) disappointment, they were sold out. Like, at all of the JoAnns’. When I asked an associate when she expected a shipment, she shook her head, incredulous that I would ask such a thing. “We’ve been out of stock for weeks,” she told me, explaining that even Amazon (Amazon!) couldn’t keep any basic machines in stock. “Good luck,” she said as I skulked off, her customer service cheer mocking my hopes for DIY glory.

And that’s how I ended up in a bidding war on Craigslist for one of the only used machines I could find in the TriState area. Ninety-five dollars later (a solid $20 over the asking price), I sat down with my very first machine, a 2-year-old Singer Tradition that is worth a third of what I paid for it.

Doretta Caprarola, director of marketing at Brother, tells me that I’m not the only one who had to fight for a machine. In light of manufacturer closures during the pandemic, Brother’s production of machines was significantly reduced — a concern considering skyrocketing demand. While Brother's overall year-over-year sales increased roughly 30%, Caprarola says that certain Brother categories were up as much as 60% to 80%. “These are unprecedented growth trends,” she says.

While the pandemic, which has created unparalleled chaos in the country (and economy) since mid-March, has gutted travel and service industries, similar “leisure” businesses braced for a seemingly inevitable downturn. But though the sewing industry doesn’t necessarily fall under the “essential business” category (unless people are sewing surgical masks and hospital gowns), companies like Brother found themselves unexpectedly thriving. Like “finishing that screenplay” or “DIY-ing a picnic bench for my backyard squirrels,” a hobby like sewing stuff — be it clothes or masks or new upholstery for shitty Ikea chairs — saw a surge, rather than a decline, in the midst of a national lockdown.

Given the shortage of machines, it’s clear that my hero’s journey from Woman Who Had Never Heard of a Bobbin to Certified Sewing Machine Owner is not unique. This was made clear, too, when I found Sewing TikTok, which consists of cool teens upcycling their thrifted goods into designer knockoffs, or using dead stock to create their own quirky-in-a-hot-way garments from scratch. But was The Great Sewing Machine Shortage of 2020 a result of pure quarantine boredom? The natural second step for the Brooklynites whose sourdough starters were at this point 2 months old? Or is it something bigger? Something more like a revolution led by teens who dreamt of a sustainable future?

Caprarola suspects that quarantine only fueled a movement already in progress, led by the youths of the YouTube generation. “[The demand for machines] is representative of trends that we’ve seen even before COVID. I would say over the last, maybe 8 months or maybe a year, [we’ve seen] this rise, especially with younger generations,” she tells me. “[They] truly do want to enact positive change, and they are willing to do the work to actually make it happen.” She speaks of teens pulling up YouTube videos and learning how to sew masks for strangers, or how to make a quilt for the local fire department.

But there’s more to it than good will toward the community. When I reflect on my own teenage years, shopping compulsively at Forever21 and H&M with the hopes of (cheaply) effecting the same cool as the girls in the indie mags, my trend-chasing seems trivial when compared to Gen Z’s more urgent pursuit of a greener future. Upcycling is all the rage. A search for “thrift flip,” a category of videos on YouTube wherein enterprising teens tailor thrifted finds of yesteryear into capital “C” Cool looks, backs up this theory that repurposing old duds is like, so-hot-right-now: It yields almost 1 million video results.

Many of these videos are made by amateur sewing influencers, often in their early 20s or younger, who have no shame in documenting their trial-and-error projects that eventually result in an imperfect, yet wearable (and, not to mention, cheap) ‘90s-inspired slip dress, or an upcycled sweater-cum-overalls. Sarah Kolish, whose YouTube channel Seamingly Sera has the tagline, “being a freak, living a recycled life,” is one such influencer. The Strawberry blonde 20-something puts out videos about “Urban Outfitters-inspired” T-shirt hacks and DIY-ing patchwork denim; most recently, she sewed her own wedding dress, letting viewers in on the process. Annika Victoria, an Australian with a retro girly style a la Blair Waldorf, recently put out a video entitled, “Learning from sewing disasters.” She, too, made her own wedding dress. And there are more DIY “Reformation-inspired” smock dress video made by young women that trigger my “oh my god, how old are you??” reflex (which goes hand-in-hand with the, “wait, how old am I?” reflex), than I care to count.

A search for “thrift flip,” a category of videos on YouTube wherein enterprising teens tailor thrifted finds of yesteryear into capital “C” Cool looks, backs up this theory that repurposing old duds is like, so-hot-right-now: It yields almost 1 million video results.

Like many of the great sewers of yore (er, the last 3 years), I, too, turned to YouTube for my project. Not unlike my mom attempting to learn things about the internet, I began by typing “how to” into the search bar. I expected a cute older woman with permed hair to walk me through the do’s and don’ts of whatever sewing entailed, a tomato-shaped pin cushion affixed to her wrist like an adorable cuff. Instead, the first result for "how to sew" was a video by Chris Tock, a Dave Ghrol-looking seamster with punk rock stickers covering his machine and Voodoo dolls hanging on his walls. Obviously, I watched his video.

In the comments, I found plenty of comrades who were watching the year-old how-to from their isolation pods (homes), some just for the hell of it: “Watching a sewing video from a mountain-looking man when I don’t even own a sewing machine,” wrote one commenter. “At first I thought this was Billy Ray Cyrus that was going to teach me how to sew,” said another.

Over the phone last month, Tock told me that his viewership doubled between March 15 and March 22 alone. He characterized the increase as “roughly a shit ton.”

He explains that things only got more out of control after that. “There was this huge spike where it went up by like 940% or so for about two weeks straight,” he says. But that crazy-high surge was short lived. “Then, there was this big drop because every sewing machine, thread, elastic, stuff like that was out of stock globally.”

Wendy Liu, a full-time sewing influencer whose channel, WithWendy, has more than 1.1 million subscribers, describes a similar peak in viewership in mid-March, during which time every upload outperformed her estimations. But was the spike indicative of more people attempting sewing projects, or part of the larger rise in YouTube viewership across the board? The New York Times reported in the early days of the lockdown that streaming platform views were on the rise — with YouTube seeing a 15.3% spike during the month of March.

“Every time I uploaded, it felt like there was this huge appetite to swallow up what I had put out,” says Liu, adding that weekly crafting live streams were also an unexpected success. “People were in need of feeling like they weren’t alone, or feeling like they were being heard.” That said, she presumes — based on feedback and comments — that a majority of her typical viewership “just want to watch how it happens,” and that it’s a select few beginners who are “ready to take the leap.”

“Sewing definitely is an intimidating hobby. You need a separate machine for it — you need the space for it. It can take a lot of motivation,” she adds.

As I dive into the depths of Sewing YouTube, Upcycling YouTube, and whichever category Tock fits into, it’s become evident that the recipe for the sewing machine shortage is equal parts boredom, the desire to quit funding fast fashion empires, and ultimately, to look cool.

“The quarantine has definitely given people time to think like, ‘Why do I buy the clothes that I wear? Were people paid ethically for it? Where does it come from?’” says Liu. “Being in the active sewing community reminds you that clothes don’t make themselves, and it takes a lot of effort to put them together. It just doesn’t seem to make sense that clothes can be so affordable.”

My sewing machine and I have been together now for just over two months, and things between us have never been better. (Just ask any of the friends I sent unsolicited chair pics to with an expectation that they would respond with praise and awe.) The act of sewing is still a work in progress — did you know it’s actually really, dreadfully difficult to sew velvet?! — but there’s joy in learning, in seeing the final product come together, and in knowing that I’m doing my part to save styrofoam Ikea products from collecting in landfills. Plus, LOOK AT MY CHAIR. 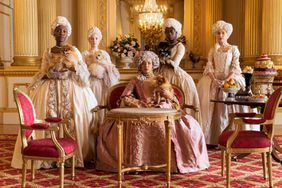