Serena Williams Loves Being Pregnant—Here's Why

Serena Williams is loving her journey to motherhood.

In an interview with E! News, the mom-to-be dished on her surprising revelation that expecting a baby really agrees with her.

She continued, "Sometimes I am walking in my house, and I'm like, 'I really like being pregnant.' I never thought I would say that. I am definitely [the type] that enjoys it."

One thing the 23-time Grand Slam winner feels like she's missing out on: Those storied pregnancy cravings, though she has tried to find a silver lining to the situation.

"I don't have the cravings, so I am a little disappointed with that," the expectant star admitted. "But I am OK with it because I feel like, maybe if I had the cravings, I would have a tougher pregnancy."

If anything, the world renowned athlete says that impending motherhood has inspired her to take better care of herself by choosing meals with "lots of greens, lots of vegetables" as well as "fish or different types of notes and seeds."

"I have just been trying to eat healthy and stay fit and definitely eating healthier than I normally do. It's pretty backwards," the 35-year-old said of her new diet.

Aside from shooting down those secret wedding rumors during the interview ("It hasn't happened yet, not that I am aware of!"), the athlete also opened up about her highly anticipated return to the court, which she admits might not be as soon as she originally planned. And she's totally OK with that.

Confessing that she's been known to have the "most unrealistic goals," Williams reasoned, "I'm having a baby in the fall, and I am talking about playing in January. That is ridiculous! But who knows. If it happens, great, but if it doesn't happen, it's not the end of the world. I am OK with that, too."

Sounds like pregnancy definitely agrees with this expectant star. 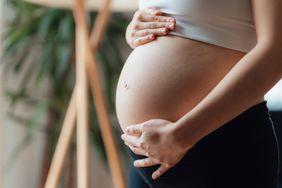 Having Dreams About Being Pregnant? Here's Why.