"Don't know what you're talking' about, don't know nothin' about that."

Serena Williams avoided speaking about her famous friend Meghan Markle on Monday (April 20), taking a page straight out of Mariah Carey's playbook. What do you do when you don't want to talk about a specific person in an interview? Say you don't know them!

Williams sat down for a conversation with supermodel Naomi Campbell and sister Venus Williams, and of course the conversation turned to Meghan and Prince Harry's recent move to Los Angeles.

"Are you happy that your girlfriend has moved to America? Meghan Markle," Campbell inquired during her No Filter online talk show while speaking with Williams from her home.

"Don't know what you're talking' about, don't know nothin' about that," Serena replied with a mischievous laugh.

"I mean they’re on the West Coast but...I mean, it’s a big deal" Campbell pressed, but Williams definitely wasn't having it.

"Never seen it, never heard of her, don’t know her," she replied. Now that's one way to protect your friend's privacy. It's a swerve that's just like Mariah's infamous answer "I don't know her" when asked about her thoughts on Jennifer Lopez during the 2000s, which has since been explained as a way of saying something nice or "nothing at all," according to Carey.

Serena has dodged several questions about Meghan in the past. But when your friend is in a famous, important position like Meghan, it's got to be difficult keeping your lips zipped. Seems like this tennis star is all about having her friend's back, and this friendship is totally goals.

If you ever need a secret kept, you might want to call on Serena. 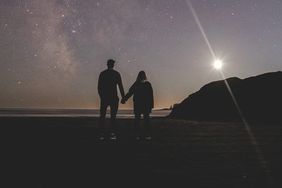