Selena Gomez Shares Her 'Revival' Tour Hair Secrets, Including How to Pull Off the Perfect Hair Flip

It's been two years since Selena Gomez's last tour, but for her comeback, everything from her custom designed wardrobe to the songs she's chosen to perform is delivered with a newfound confidence – it is her revival after all. Playing a major part of her look is the singer's hair, which she calls "a part of my set." And, as Pantene's spokesmodel, she relies on the brand for those bombshell curls that move so breezily when they hit the wind machine on stage, they rival Beyoncé's. "I feel like it just becomes part of what I'm singing about in a weird way, it's like I can speak with conviction through my hair," Selena tells us during week two of her eight-month Revival tour as she buses through Canada to her next show.

Pairing her oversized curls with over-the-top designs like an all-black ensemble from Karl Lagerfeld or a rainbow metallic bodysuit from Sonia Rykiel, offstage, Selena lounges in a pink slip with her hair pulled into a loose bun while songs ranging from the Four Tops' '60s hit, "I Got A Feeling," to Lauryn Hill's "Ex-Factor" play. Ahead, Selena and her hairstylist, Marissa Marino, give us a look at the behind-the-scenes of her tour, including how she gets onstage ready.

What's your day-to-day schedule on tour?

Selena Gomez: Tour is really unpredictable, so it's kind of all over the place. Sometimes we'll wake up around 1:00 p.m. because we were on a 13-hour bus ride, or other times we'll get up around 10:00 a.m. and do a group workout. It changes from day to day, but usually, we keep the schedule pretty organized. Even if we wake up around 1:00 p.m., I'll do a workout—I'll do a Pilates machine or I'll sweat a little bit. Then I'll do stretches, a warm up, I'll kind of get into hair and makeup, take my time. Then I'll do interviews and meet and greets. Then we'll bump up my hair and makeup to keep [it] as fresh as possible, and I'll do a prayer and get on stage.

I love to keep everything very calm [backstage]. In my room, I always have fresh flowers and essential oils—I'll have lavender or lemongrass, it just depends on what we feel for that day. But I love to keep everything calm. I love my little station where I get ready and I've got my people with me. It depends on music, too, because sometimes I'll be in the vibe of wanting to listen to Rihanna or another day I want to listen to Patsy Cline and get into the mood a different way.

What goes into Selena's hair look?

Marissa Marino: So for meet and greet, a few hours before the show, we'll smooth it out and make it look pretty and presentable for those pictures. But I can't curl her hair for her show style then because three hours later it's not going to be holding up the way it was. So right before the show is when we do the really tight curls and the full look, which is the Pantene Style Series Airspray ($5.99; drugstore.com). I spray that on before I curl it and brush it through. Then I curl it, set it and backcomb each section and spray [it] again with the Airspray to set it. I would say we go through about a quarter of a bottle [every show] because I'm spraying it before, after and throughout.

How do you take care of your hair in between shows?

SG: Well, I don't wash my hair every single day—I'll take a day or two in between to keep it healthy. [Pantene has] the new Expert Intense Hydration Shampoo and Conditioner ($4.99 each; target.com), and basically I've been using that anytime I wash my hair. But, what's more important to use is actually when I'm on stage with the Airspray. It's super light and easy and it feels really good. I love to move my hair around—I don't like it stuck in one position. And I'll use a little oil at night (like the Pantene Repair & Protect Overnight Miracle Serum ($6.29; drugstore.com), just to kind of put my hair in a bun if I want to keep my hair out of the way.

You said you like to move your hair around on stage, and between the wind machines and hair flips, it really is moving! Is there a secret to the perfect hair flip?

SG: Nooo [she says laughing]! I think I just become like when you're a kid, and you do the inner rockstar thing. When I'm connected to the words I'm singing—which I've never felt more connected to music in my whole life than the past two years with this record and even new music I've been creating—it just takes over.

How Often Should You Really Clean Your Hairbrush?

For the ballad portion of the show, you switch Selena's hair into a braid, how is that quick change?

MM: Me, the wardrobe stylist and the makeup artist have kind of figured out how to dance around each other, especially for that one in particular. For all of the other ones, I can kind of let her get dressed and then touch her up, but for that one I can't wait for her to get undressed and dressed because I would never be done in time. So, honestly, as soon as she comes back, I grab her hair and I stand over the stylist while she's on the ground. We [work] off of the audio that's playing, so by now, we know when this part hits, 'okay, we have this much time.' And someone is always yelling at us, '30 seconds, 10 seconds.' So I've learned to hear the beat and be like, 'okay, this is the part where I need to have the ponytail done, I have this many more seconds to pin the front pieces.' Now it's getting to be where they're like 'you have 30 seconds,' and we're already done.

What do you want fans to take away from your Revival tour?

SG: When my life at one point became scrutinized, I was devastated when that was happening and I definitely let that get to me until I realized that I could utilize that. So instead of being embarrassed that people have seen my past, I would rather step on the stage now, after two years of working on Revival, with the grace and the confidence that I've been able to find in myself – it almost makes me happy that [my fans] have known my journey. Now they can look at me and they can say 'Oh my gosh, she went through that, I can do it.' I want them to feel enlightened and empowered when they leave the show -- I want them to have fun, too -- but that's what I feel. And you can tell when I'm on the stage, too, I'm singing my songs with such conviction and I mean the words I'm saying. And I think that's all that anyone really wants at the end of the day, they want their words to mean something and they want to feel something. 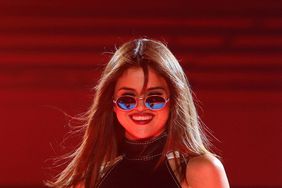