Selena Gomez let her feelings show in Miami on Saturday, when the 23-year-old pop star took the stage at a stop on her Revival Tour and honored her friend singer Christina Grimmie, who was fatally shot on Friday at a meet-and-greet following a performance in Orlando.

Fans looked on as Gomez took the spotlight to open up about her friendship with the former Voice contestant. “When she was 14, we met her and my parents and I signed her,” Gomez said. “One thing about Christina and her family is that she holds her faith so closely to her. And I think it’s not about religion and it’s not about anything or good deeds. It’s just that she had faith. And I don’t really understand how this really happened but I would like to dedicate this next song to her.”

The star moved on to perform a piano-driven rendition of Hillsong Worship’s “Transfiguration” and her own “Nobody,” but couldn’t help tears from rolling down her face, prompting her to apologize to fans and mouth, “I’m sorry.”

Gomez also took to Twitter to show her love and support of Grimmie and her family. "My heart is absolutely broken. I miss you, Christina," she tweeted.

“Words cannot begin to describe the pain I am feeling,” Gomez’s stepfather, Brian Teefey, also Grimmie’s manager, told People in a statement. “I learned this business through the eyes of a father and Christina was like a second daughter to me.” 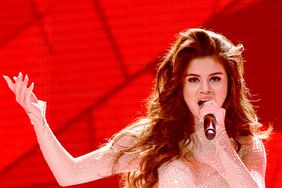 Selena Gomez Shares Her 'Revival' Tour Hair Secrets, Including How to Pull Off the Perfect Hair Flip
It's Been 10 Years Since Rebecca Black Released "Friday," and the Internet's No Kinder to Young Girls