Selena Gomez might have gifted us with catchy tracks, like “Bad Liar,” “Fetish,” and “Wolves” this year, but come 2018, Selenators will hear the singer’s most emotionally raw album to date.

While making an appearance on BBC’s The Radio 1 Breakfast Show with Nick Grimshaw on Monday morning, the former Disney alum revealed that she’s hard at work on new material inspired by her difficult past year.

“There is no might, there is an album,” the 25-year-old definitively told the host. “And I think it’s fair to say that people know the year I’ve had, and I’ve poured my heart into my music and I wanted it to be fresh.”

As the Revival star dished about her changing sound and style of music, she added: “It wasn’t really about charts for me or numbers. It was more just about what I could creatively do for my music. Yes, I can successfully say that my inspiration for this next album is in full motion and it will be very soon.”

She continued: “It’s exciting to be in a place where I love surprising people and creating new areas of music I can explore. And I’ll get to be present, you know? I was taking some time off for my health and it was good, but now I get to be here.”

As further proof of her commitment, the “Good For You” hitmaker took to Instagram on Sunday, stating that she's making the recording studio her home until 2018. “Currently. Until the next year. Here’s where I’ll be,” she wrote alongside a moody photo of herself sporting her signature raven locks and a white button-up while singing into a microphone.

Considering that Gomez’s whirlwind year has included kidney transplant surgery, a breakup with the Weeknd, and a rekindled romance with on-again, off-again beau Justin Bieber, we’re looking forward to some scintillating new tracks from the pop star! 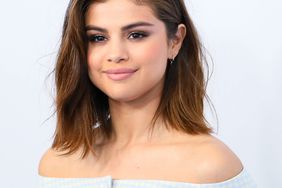 Selena Gomez Is Tired of Downplaying Her Relationship