When it comes to Sean “Diddy” Comb’s famous bashes, it’s either go big or go home. So fittingly, he rang in his 46th birthday in an epic way, throwing a star-studded bash on the luxe grounds of Green Acres Estate in Beverly Hills, Calif. Saturday night.

Continuing the celebration of his actual birthday (Nov. 4), Combs hit the red carpet with his mother, Janice, looking dapper in a wine-hued Zegna jacket with satin lapels and Zegna velvet slippers. Meanwhile, his mom was dressed to the nines in all white with custom bling adorning her fingers.

Although Combs hurried inside to enjoy the party, his stylist, Derek Roche, dished about the inspiration behind his birthday look, telling us: “Initially, because it was his birthday, [Diddy] was like I want to be comfortable. I want to have fun and party, but then he said, ‘It’s my birthday party. I want to look amazing.’” Rest assured, he lived up to his #goals.

The hip hop mogul’s guests, including Jay Z and Chris Brown, brought it when it came to fashion too, with most of the men in suits and the ladies in pencil skirts and glam cocktail dresses. Zac Posen, for example, rocked a black Brooks Brothers suit with a bowtie and a diamond pin. “Diddy is family for me…I always put on my best for Sean,” the fashion designer, who had his “muse” Heidi Klum on his arm, told us. Meanwhile, Miguel, who rocked an ensemble by Dries Von Noten, Hater and Costume National, told us he wouldn’t have missed the chance to celebrate Diddy’s birthday. “He’s the originator,” he told us. “He showed us how to really do it and how we can really take it and he continues to push. He’s an icon, he’s a f*ckin’ motivational speaker and he’s big bro to all of us. I think to be here is an honor as much as he’s inspired us.”

Kris Jenner's 60th Birthday Party Was One for the Ages

As for other guests in attendance, Kanye West paid his respects, donning all black and rolling in with an entourage, Kourtney Kardashian showed off her killer figure in a vintage sequined jumpsuit and Kendall Jenner rushed inside wearing a black cut-out jumper with model BFFs Cara Delevingne and Gigi Hadid by her side. Others made it a date night, with Kris Jenner in Givenchy posing with her boyfriend Corey Gamble on the red carpet, Bella Hadid and the Weeknd sporting matching black ensembles, and Pharrell and his wife Helen Lasichanh both wearing fashion-forward looks. (Tyga was also there but sans a conspicously missing Kylie Jenner.)

Diddy's sons, Justin Combs and Quincy Brown, were also on hand, as well as their respective mothers, Misa Hylton Brim and Kim Porter. When we asked Justin what birthday wish he had for his father, he said, he just wanted him to “enjoy himself [for] the rest of his life.” Chances are he got a great start from the party last night. 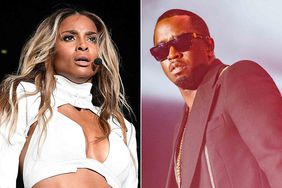