Do you remember that stunning black gown InStyle's February cover star Gwyneth Paltrow wore to the InStyle Awards back in October 2015? The stunner hailed from none other than Schiaparelli—a go-to red carpet brand for the likes of the goop founder, Nicole Kidman, Tilda Swinton, and Claire Danes.

Congratulations are in order for the famed house, as it has officially joined the handful of fashion houses with a spot on the coveted Haute Couture calendar at Paris Fashion Week. Only 15 brands hold the distinction, including the likes of Dior and Chanel.

Schiaparelli has been around for well over half a century—founded in 1927 by Elsa Schiaparelli. Collaborations throughout the years with iconic artists like Salvador Dali and Jean Cocteau catapulted the house into worldwide fame, but it did go dark for more than fifty years with a closure in 1954. It was resurrected in 2013 by Diego Della Valle and Bertrand Guyon has sat at the brand's creative helm since 2015.

Up next is Schiaparelli's next couture show on Jan. 23, just in time for awards season. Will the house's fans like Paltrow, Zellwegger, Chopra, and Thurman opt for one of its designs in the coming weeks? Only time will tell. 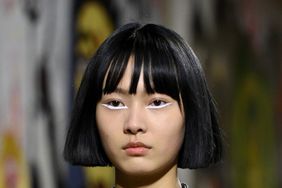