Our favorite Gladiators returned last night for the third season premiere of Scandal! The episode picked up only 22 minutes after last season’s finale and even though Olivia Pope is facing national news of her leaked affair with the President, she’s still dressing as fierce and chic as ever. We spoke with costume designer, Lyn Paolo, who gave us the low-down on Olivia’s wardrobe this season. “There is a style evolution on several of the characters, but on Olivia, you’ll see how tumultuous her personal life is,” Paolo tells InStyle. “We’ve made some adjustments to her costume and she’s in a darker palette this year.” Olivia must sort through two rocky relationships – one with her estranged father and another with Fitz (Tony Goldwyn) -- and that will be reflected in her wardrobe choices this season. Case in point: the dark gray Escada jacket and Armani silk tank she wore last night when she caught her Pope & Associates gang trying to "fix" her. Click through the gallery for all of the exclusive details on Olivia’s outfits from season three's first episode! 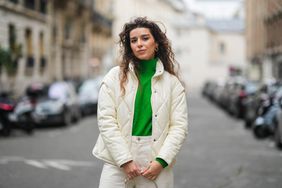