Director Roger Kumble made a cameo.

Frenemies on-screen, BFFs IRL. That's how things are for Sarah Michelle Gellar and Selma Blair, who shared an impromptu Cruel Intentions reunion lunch alongside director Roger Kumble. Both of thems shared images from their lunch date on Instagram, writing touching captions about their friendship and offering their followers a look into their private jokes.

"I can't show how good it feels to have my friends come and bring lunch and news of the world. So I will just share the standard happy selfies. With love," Blair captioned the photos. "Who knew this #cruelintentions trio would be forever?"

She added #scarah, which may leave some fans scratching their heads. However, Gellar explained it all on her feed, telling her followers that it's what Blair has called her since day one.

"No cruel intentions here. Little known fact- since the day we met @selmablair has called me Scarah-@rogerkumble I blame you," she wrote.

"Scarah my love," Blair wrote in the comments, adding a trio of kissing lips emoji.

Cruel Intentions director Roger Kumble posted the photos — and his own jokes — to his account.

"First day at my new job as Sugarfish Postmates Delivery-boy and look who I run into!!! @selmablair & @sarahmgellar!” he wrote alongside a screenshot of the selfie. He even offered up a Cruel Intentions reference, adding, "I tried to get them to kiss, then they kicked me out with no tip!" 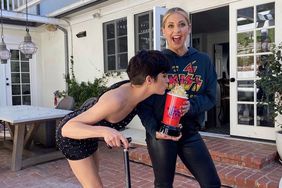