Sarah Jessica Parker and Gerard Butler sported coordinating (and equally handsome!) blue ensembles for a press conference preceding the Nobel Peace Prize Concert in Oslo, Norway. The stars were on-hand to host the evening's festivities, which included performances by Jennifer Hudson, Ne-Yo, and Kylie Minogue, among others. “It’s such a privilege to be part of this year’s Nobel Peace Prize Concert,” Parker said of her duties. “I am honored to be sharing the stage with such amazing performers to promote the power of peace around the world." During the ceremonies, officials from the European Union accepted the 2012 Nobel Peace Prize.

Plus, see more of this week's hottest parties! 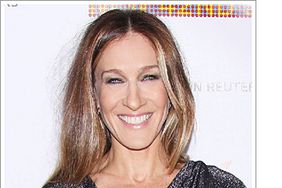 Sarah Jessica Parker Goes To The Circus, Plus More Parties!