This week, InStyle is diving into the changing look, complicated impact, and undeniable power of summer's uniform: the swimsuit.

The idea of posing for high-resolution photos in nothing but a bikini inspires anxiety, if not downright fear, in many women. And it’s no different for 19-year-old swimsuit model Sailor Brinkley Cook—even if her mom is legendary supermodel and Sports Illustrated icon Christie Brinkley.

“I've grown up with a lot of body issues. I spent my entire life being so insecure,” says Brinkley Cook. “When I did my first bikini shoot, I was worried because I don't even have boobs; I’m a B cup. I don’t have all of these intensified assets that many bikini models do. Why should I be considered sexy?”

Ultimately, Brinkley Cook found the empowerment she was looking for in that shoot, a photo session with her mother and sister for 2017’s Sports Illustrated Swimsuit Issue. She posed again for SI this year, both in an Aruba-set dreamscapeand a nude portfolio honoring women’s voices in the #MeToo era. “I had to own who and what I am at such a bare, raw state,” Brinkley Cook says. “I really felt like I was celebrating my body and my womanhood.”

Now that she’s a pro, Brinkley Cook has a few secrets to spill about how to capture a stunning, feel-good bikini shot. For starters, timing is everything, especially when you’re after that golden light. “When we were shooting in Aruba, we woke up at 3:30 a.m., did hair and makeup until 4:30, and got out to set by 5. That's when the sun was coming up, and we shot until sunset,” she says.

But for Brinkley Cook, the real prep begins a full month beforehand, with an amped-up fitness routine. Below, she details everything she does a month, week, and 24 hours before a swim shoot to feel and look her best on camera—including exactly when to shave and the wacky truth about airbrush tans.

Fitness: “In general, I try to work out every day. A normal workout would start with cardio. I’m a big runner—I try to run two miles a day. Then I work out with my trainer at Work Train Fight, doing HIIT workouts like burpees and lunges. If I need a day off, I’ll do yoga or something low-intensity,” Brinkley Cook says of her regular routine. For a full month before a swim shoot, she pushes herself even harder. “I work out like an athlete. I add on weight training, I box, and really push my muscles,” with a particular focus on her abs. “At swim shoots it's a lot about definition, no matter what size or shape you are. So when you’re about to be in a bikini, weight work is best. I always try and appreciate however my body is at the moment, but I love when I see the little line down the side—that’s always great.”

Diet: “I start cutting sugar 10 days before. Every time I stop eating sugar, it's immediate, and when you're going to the gym every day, cutting out sugar changes the game. I see myself getting a lot more shredded.”

Hair removal: “I always go for shaving. I've never done any laser or waxing. I shave with Vitamin E oil and so I don't get razor burn, which is my biggest concern. The first shoot I did, I shaved the night before and had razor burn on the shoot, which sucked. So the next time, I shaved my legs three days before. But the bikini area, I shaved the morning of so I didn't have any bumps and just made sure to put moisturizer on so it didn't get irritated or itchy.”

Airbrush Tan: “I got spray-tanned both times I did Sports Illustrated, and it's life changing. The first one I got, my mom and my sister said I looked like a Cheeto at first. But you wash it off and get this bronzey, goddess situation. The day before the last shoot I did, in Aruba, a guy came to my house and gave me this beautiful, all-natural, golden spray tan with avocado and coconut oils. We went in my shower—I was fully nude—and he just sprayed me down with a hairspray-like bottle. He was super professional. When you're tan, the definition of your body is picked up more, so a spray tan is a confidence booster.”

Diet: “I eat as clean as possible. Lots of lean protein. I'm vegan so I can't have grilled chicken or salmon, but I go for salads with quinoa and beans and fresh vegetables and then something light, like a sautéed vegetable dish, for dinner.”

Gallons of Water: “24 hours before a shoot, I'm drinking a crazy amount of water—I’m talking like three gallons.”

Makeup: Don’t wear any, basically. “When you're on shoots, your face and your hair deal with so many different projects, so I try to keep my skin as clear as possible days off. I’m very active too, so makeup just wouldn't work for me on the day-to-day.”

Why I Stopped Shaving My Bikini Line—and You Should Too

Haircare: “If you're on a swim shoot, you might as well go all out with the mermaid goddess look,” says Brinkley Cook, describing her hairstyle for the 2018 SI shoot. Getting hair to cooperate on a beach is no small challenge, though.“The wind was crazy so [hairstylist John Ruggiero] used texturizing spray so it stuck together. He was running and grabbing pieces of my hair that were getting stuck to my swimsuit.”

Get Waisted: “I like pull the straps up pretty high on the waist of my bikinis—it’s the style that's the most flattering on camera.”

Body Makeup: “Coconut oil on my body for shine and also it kept me feeling not dry or chalky for the rest of the day. And in Aruba, the makeup artist, Tracy Murphy, had all incredible tanning products to add on to my spray tan,” says Brinkley Cook—but that also made her a sand magnet. “Tracy had a bucket of water that she'd pour on me whenever sand stuck.”

Gulp, No SPF: “Not on the face. They try and keep you covered as much as possible when you're not being shot because the sun is strong. But I run super oily and putting sunscreen on, I literally would've just sweat off all my makeup.”

Pep Rally: The minutes and second before the first pose are all about coaxing out your inner Wonder Woman. “I listen to rap, rock, and hip-hop before a shoot because that embodies badass women to me. Nicki Minaj, Cardi B, Lauryn Hill, Erykah Badu. In front of the camera, I try and develop this alter ego of thinking, ‘You're the shit, you're badass, you deserve this.’”

Most Flattering Pose: “The best way to pose in a bikini is when you put your hands above your head. That’s my go-to, even if I'm on the beach and my friends are taking photos. I also love a hip-pop—I definitely got that from my mom. We have the hips so we gotta use ‘em. And arch your back.” One surprising trick she picked up? Don’t “Move your stomach around is something that I don't think I knew before I did a swim shoot. [Bodies] looks great in movement.”

The Beach Look: The “beach look” is more man-made than beach-made, Brinkley Cook admits. “It’s funny, the photographer and makeup and hair artists, they're holding you while you bend over to get the hair wet. It’s definitely not like you can just go running around in the water and come back and look great.They have spray cans to give you a dewy look.” 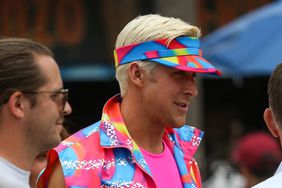 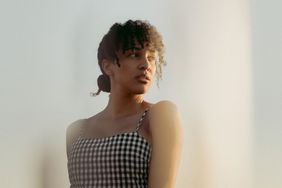 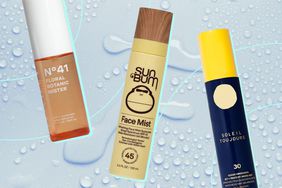