Ryan Reynolds is talking all about his baby girl, James Reynolds, this week as he promotes his new film Woman in Gold. The new doting dad, whose daughter was born in January to him and wife Blake Lively, told Willie Geist of the Today show that though he sometimes can't believe his amazing life and career, he doesn't want his daughter to go into show business.

The native Canadian told Geist he is already worrying that his daughter is on the fast track to Hollywood and said that he actually whispers "normal, everyday jobs" into her little ears in hopes she will pursue a less chaotic career path than her parents. Reynolds tells her to be a "flight attendant" or "barista" or "Dallas Cowboys cheerleader." Geist scoffed at that last occupation and Reynolds agreed that, ideally, he wouldn't want his daughter to be a Dallas Cowboys cheerleader.

Uncovering the History of the Woman in Gold's Gold Dress

Reynolds also talked about working alongside Dame Helen Mirren on the film. He called her "one of the true masters of this craft" but also noted that she has a pretty big potty mouth. "Don't let the dame part fool you," he said.

You can catch Woman in Gold is out in theaters now, and watch Ryan Reynold's Today show interview below.

PHOTOS: Check Out Blake Lively's Changing Looks Over The Years 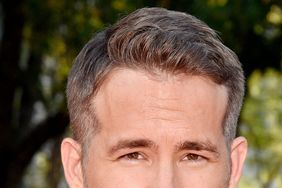