Ryan Reynolds and Blake Lively's decision to name their daughter James may seem unusual to some, but according to the Deadpool actor it's really not that weird. During an interview on Good Morning Britain, the star defended his and Lively's choice, revealing that they decided on the traditionally male name as a tribute to his late father, who passed away from Parkinson's disease last year.

"In the spectrum of weird celebrity baby names, I feel like we're not really breaking any new ground here," Reynolds said during the interview. "I mean, I didn't call her Summer Squash Meadow Lark, or something." Valid point, Ryan.

The doting dad then went on to give an update on little James. "She's teething at the moment," he revealed. "I love being a father. I don't want to be one of those celebs who talks about being a parent like they're the only person in the world who has ever done it. It's the most common thing in the world but the most profound. It's super fun. I just love it."

Reynolds is currently on a world tour to promote his upcoming film Deadpool, and he's been giving a slew of great interviews. This week he also revealed he broke the law to smuggle his wife's favorite apple pie into the U.S. Talk about a devoted husband. 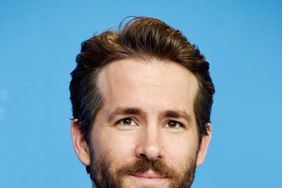