It’s a royal carpool! Prince William was spotted driving the whole family to grandma’s house for a Christmas lunch on Tuesday, and this photo is just begging to become a meme.

The studly dad was behind the wheel as his brother Prince Harry got a spot in the passenger’s seat. Kate Middleton took a spot in the back with 3-year-old Prince George and presumably Princess Charlotte, although we can’t see her in the shot.

Here, we’ve imagined nine conversations that the young royals could be having based on science—er, obsessing over the British monarchy.

1. How different William looks in glasses.

3. When exactly is the right time to introduce Meghan Markle to the Queen.

4. Why the men outside are wearing funny hats. Gosh, George, we’ve talked about this.

5. Whether figgy pudding will be on today’s menu.

6. How shiny Meghan’s hair is.

7. Why the darn paparazzi are waiting in the middle of the road.

8. If purple was an acceptable color to wear to a Christmas party.

9. Whether or not there will be balloons at this party. 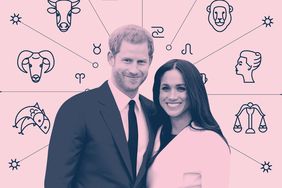