When Pantone named Emerald 2013's Color of the Year, it was not only an accurate prediction for the fields the trend forecaster covers—fashion, interiors, and graphic design—it also inadvertently named the Gem of the Year. The renewed popularity of the precious stone snowballed last year and is still going strong. While there is not a gemstone equivalent to Pantone’s 2014 Color of the Year, Radiant Orchid—a blend of fuchsia and purple with pink undertones—the firm’s executive director, Leatrice Eiseman, said it was comparable to amethyst when the announcement of the year’s color was made more than seven months ago.

Well, as it turns out, Pantone was close, but not quite right when it came to gems. The Gem of the Year is tanzanite, a stunning stone that radiates three different colors: violet, blue, and burgundy. “To me it looks like Delphinium flowers,” says designer Suzanne Felsen whose minimalist jewels have been worn by everyone from Adele to Halle Berry.

Since the only tanzanite mine in the world was discovered in 1967 at the base of Mount Kilimanjaro in Tanzania, it has had some sensational high-profile jewelry moments. Just last year Sarah Jessica Parker flaunted one of Tiffany’s stunning tanzanite necklaces at the firm’s big Blue Book bash and Lily Collins color coordinated a pair of tanzanite and diamond earrings by Takat with her Zuhair Murad dress at the Vanity Fair Oscar party. Yet tanzanite has never appeared in as many jewelry collections as it has this year. Why suddenly is the stone at its peak in popularity?

Well, the answer seems to lie in the same reason why Pantone picked Radiant Orchid as the Color of the Year. “All the various hues of violet are so in fashion now, the stone is in perfect sync,” says designer Nak Armstrong. “From the family of purple stones in jewelry, there is nuance and sophistication to the purple-blue in tanzanite that I love.” Irene Neuwirth, whose sensational jewels have sparkled on countless red carpets, has created a couple of jaw-dropping one-of-a-kind statement necklaces with tanzanite and used it as accent stones in earrings. She says she was just “feeling it.” If your feelings are the same, find a jewel to fit your style. When talented designers are all united about a gem—the way they have been about emeralds—it is guaranteed to be popular well beyond this year.

Want more? Check out our gallery of celebs wearing Chopard at the Cannes Film Festival! 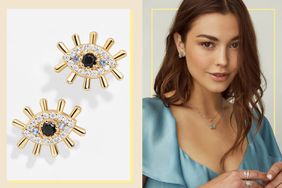 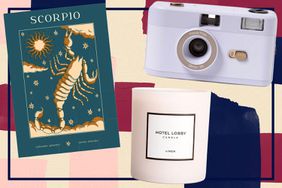 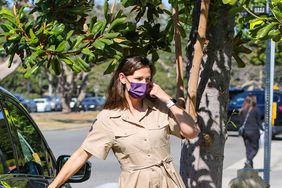 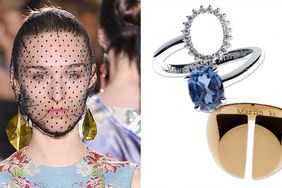 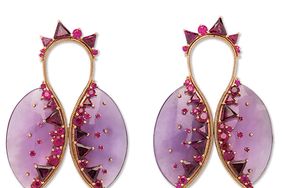