Actress Robin Wright has a big night ahead of her at this evening’s Golden Globe Awards; The actress is nominated for best actress in a drama series award for her role as Claire Underwood, the wife of Senate Majority Whip Francis Underwood (Kevin Spacey) on the Netflix-exclusive show, House of Cards.

But she’s not leaving home without her good luck charm, new fiancé Ben Foster. "I don’t know if it is for luck, but I like being next to him all the time,” she told InStyle at Diane Von Furstenberg’s Journey of a Dress exhibition premiere in Los Angeles. “And there is no pressure. It is so nice.”

Not only is the actress nominated herself, but the show has been nominated for four Golden Globes, including best drama series (the show made made history in September by taking home three Emmy awards). “What I do in my job is share stories and you want to touch people with a story,” she told us. “When people are touched and recognize you for that, you feel like it worked! It isn’t about if you win, it is that you touched people.”

On the show, we can't get enough of her impeccably-tailored outfits, making her one of the most stylish faux politicos on TV. But what will the actress wear tonight? “Totally decided (on my dress),” she says. “Vintage Halston. Studio 54, baby!”

Tune in tonight at 8:00PM ET/5:00PM PT on NBC‎ for the 71st Annual Golden Globe Awards and stay tuned to InStyle as we cover the event live. Meanwhile, here's everything you need to know about the Golden Globes. 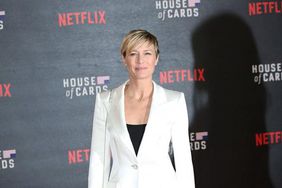 What Happened When House of Cards's First Lady Met The Obamas? 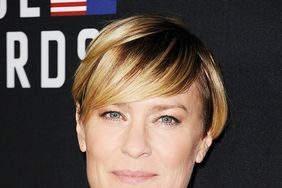