Rita Ora starred in her own version of That '70s Show in New York City on Monday.

Over the course of the day, the singer, who was in town to promote her latest single, "Your Song," stepped out in a staggering total of four retro-inspired looks.

With her hair styled in a curly shag à la Jennifer Lopez in Shades of Blue, the 26-year-old's first decade-defying ensemble of the day was a psychedelic pink and purple Emilio Pucci track suit, which she accessorized with oversize Tom Ford aviators and a pair of coral peep-toe pumps.

VIDEO: Style Talk with Rita Ora: This or That

Next, Ora was spotted making her way to an appearance on Elvis Duran and the Morning Show, wearing a floral orange ensemble with a ruffled off-the-shouler neckline and matching pattern pants.

While two bold looks would have been enough for most style mavens, Ora was only halfway through her one-woman fashion show. The Fifty Shades of Grey actress toned things down a bit for a stop at Billboard in a button-down, black tea-length dress by Chanel and a pair of white sneakers—a combination that's giving us major vintage school girl vibes.

For her final act, the British pop star went full Saturday Night Fever, and opted for a colorful fringe frock, which she teamed with star-shaped hoop earrings for a YouTube fan event.

And that, ladies and gentlemen, is how you do a decade justice. 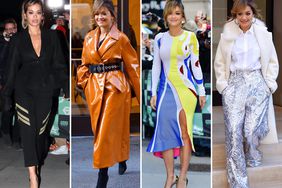 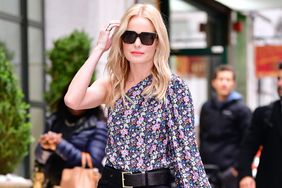