I’m going to go out on a limb and declare that Rita Ora’s “Anywhere” is the best song of 2017. If you haven’t heard it, please do me a favor, step away from the cubicle, and download it right now. It’s the perfect jam to play at any party and since its release in October I can’t stop listening to it, which brings me to her fashion.

It took me a while to hop on the Rita train, and now I’m leading it full speed. On Thursday, the 27-year-old British pop star, actress, and TV host took a cue from Blake Lively and while in New York for a series of promotional events killed it in not one, not two, not three, but four outfit changes. The results were epic AF, but this isn’t the only time Rita has dominated in the style department.

Earlier this week, she wore a body-hugging Versace dress at the British Fashion Council’s Fashion Awards and later hit the stage, again in Versace, at a party during Art Basel Miami.

But back to her four looks.

She first turned to Ellery for a waxy brown leather coat that she styled with an eyelet-covered Miu Miu black belt and Stuart Weitzman boots. Underneath the coat? A long-sleeve graphic and multi-colored Esteban Cortazar dress with a slit, because why not? She paired the ensemble with Jennifer Fisher jewels and Aquazzura gold pumps.

Later, she switched it up with silver wide-leg pants that could pass for aluminum foil with a white blouse and a cream-toned fur-lined coat. Who could possibly have the confidence to pull this off? Only Rita. And while that look is pretty extra, we’re major fans of her final suited look—elegant, yet fun thanks to a subtle peplum feature.

Scroll down to see all four of them.

Ora in a textured silver wide-leg pants with a white shirt and cream-toned coat.

Ora in a tailored suit with a peplum design. 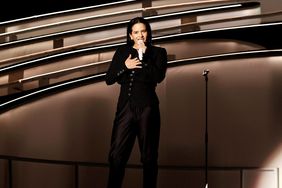