"Queen of Disco" Donna Summer, whose chart-toppers provided the soundtrack for the 1970s club scene, has died today at the age of 63. The five-time Grammy winner rose to fame with hits like "Hot Stuff" and "Bad Girls" before co-writing the singles "Love to Love You Baby" and "She Works Hard for the Money." Summer not only leaves a musical legacy as a multiplatinum-selling artist, she was also an actress, appearing in the 1978 film Thank God It's Friday—which eared her a Best Song Oscar for "Last Dance." She is survived by her husband, Brooklyn Dreams vocalist Bruce Sudano, as well as three daughters and four grandchildren. Click through the gallery to view the disco queen's most memorable style moments. Forever and ever, we love to love you Donna! 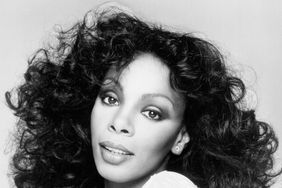 Happy Birthday to the Late Donna Summer
It's Been 10 Years Since Rebecca Black Released "Friday," and the Internet's No Kinder to Young Girls

Simon Rex, Again and for the First Time
How the Leotard Dress Code of the '80s Set the Stage for Your Yoga Pants