Cory Monteith, we will miss you. The 31-year-old Canadian actor passed away suddenly in Vancouver on Saturday, and sent fans around the world into a state of shock and grieving. He first charmed his way into our hearts as the lovable football player with a softer side Finn Hudson on Glee in 2009. "I wasn't like Finn. I didn't really go to school as much as he does," he once told InStyle.com. "I cut a lot of class, so I'm glad things worked out as well as they did!" It was on that very set where he met his girlfriend, Lea Michele. A TV power couple since last January, they traveled the world together -- even doing fun fashion things like stopping at a Versace runway show during Couture Fashion Week last summer -- and became one of the most adorable duos of red carpet season. We can't help but remember one of our favorite Cory Monteith moments, when the couple got ready for the SAG awards together in January. The actor told us, "Lea's dress? It's stunning. I am the luckiest man!" Cory, you are gone too soon.

Plus, read our archive of Cory Monteith coverage. 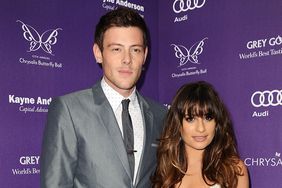