There's nothing like a little southern charm to get people to the polls. As Reese Witherspoon enjoyed a sunny day in Los Angeles and headed to the gym Monday, she had a little fun with her sporty ensemble and rocked a long-sleeved sweatshirt emblazoned with 'Vote Ya'll!'

The Oscar winner wore the Draper James French terry top over a pair of cropped black leggings and completed her sporty, election-friendly ensemble with white sneakers and cat-rimmed shades. With water bottle in hand, Witherspoon had a determined look on her face as she walked to her workout with a book bag on her back.

Speaking of southern charm, Witherspoon couldn't stop gushing on Instagram as she attended Dolly Parton's concert in Los Angeles Sunday night with a group of girlfriends. The actress went on a posting spree about the show Monday, sharing snaps that she took while she was there.

"Girls night with these ladies & @dollyparton ... Doesn't get much better than this! #PureAndSimpleTour #WhatWouldDollyDo," she captioned photo of her friends and herself sporting a Draper James 'What Would Dolly Do?' tote bag.

"Today's #MondayMuse?! The incomparable @dollyparton, who made my musical dreams come true last night! You're a legend Dolly. I will always love you! #DreamsDoComeTrue #DollywoodBowl," she wrote alongside another photo, which showed her flashing a big smile next to the country music legend. 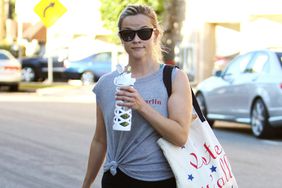 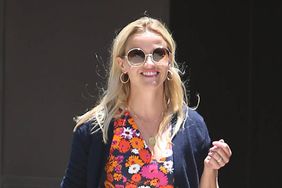