It's been quite a year for our feathered friend—the swan. Not since Björk wore her infamous swan dress to the Academy Awards in 2001 have swans gotten this much attention on the red carpet. "I thought that swan dress that Björk wore was beautiful and wonderful," Florence + the Machine singer Florence Welch told us at a pre-Grammy party this weekend, "I would wear that." And she did—sort of. Welch wore a different swan interpretation to the Grammy Awards last night, walking the red carpet in a Givenchy Couture dress with swans on it. She joins fellow swan fans Natalie Portman, whose portrayal of the aquatic bird in Black Swan earned her an Oscar nomination, and True Grit star Hailee Steinfeld, who walked the Berlin International Film Festival's red carpet in a Miu Miu pleated silk dress with a youthful swan print. Tell us: Would you wear swans on your clothes?

We're Calling It: These Are the 50 Best Dressed Women of 2019
Kristen Stewart Clearly Has a Thing for Sexy Crop Tops and White Socks 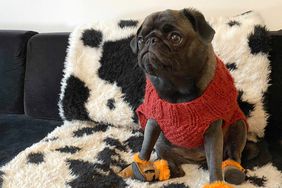