It's official — Rachel Bilson and Bill Hader have made their debut as a couple at the 2020 Golden Globes.

After weeks of rumors, the actors stepped out together at this year's ceremony, Bilson in a sheer lace dress and Hader in a dapper black velvet tux.

Ahead of the awards, makeup artist Amy Nadine shared a photo of the couple together, writing, "And they're off to the Globes! The cutest couple ever @rachelbilson and #billhader!"

The show marked their first public event together after they were first spotted on a coffee date in Hader's hometown of Tulsa, OK last month.

Hold Up, Are Rachel Bilson and Bill Hader a Couple?

According to TMZ, eyewitnesses at the local Starbucks revealed that Hader's family joined them, meaning that Bilson has already met the parents. ​​​​​​And if this red carpet debut is anything to go by, it sounds like things are still going steady. 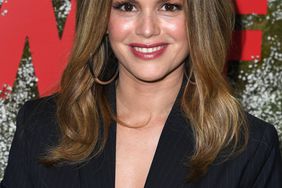