Beasts of the Southern Wild’s pint-size Quvenzhané Wallis is getting the superstar treatment in the fashion world—just yesterday she wore a Stella McCartney dress to the Film Independent Spirit Awards, where she was nominated for Best Female Lead. And while the designer duds keep flowing in, there’s one red carpet mainstay that remains—her puppy purse. “I brought one to Utah [for the Sundance Film Festival], and that was the first one I ever brought everywhere,” the nine-year-old told InStyle.com. “Now I’ve started to collect them.” And Benh Zeitlin, the director of the film, loves the animal-friendly statement. “It makes a lot of sense because the first thing she ever told us at the auditions was a story about her dog,” he said. “I like that she’s staying true to herself.” So, does this mean we’ll see one on the Oscars red carpet? “Maybe!” she hinted. It would be an accessory to remember!

Plus, see more of this year's Oscar nominees! 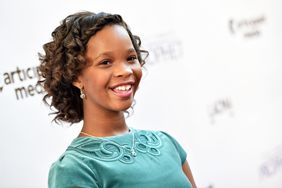