There's Another Royal Baby on the Way, and It's Not Kate Middleton's

Any fan obsessed with the royal family probably has their eyes on Prince Harry and Meghan Markle ahead of their May 2018 wedding, but they might not know that in the meantime, another royal has announced some major news.

There's another great-grandchild on the way for Queen Elizabeth, because her granddaughter Zara Tindall and husband Mike Tindall are pregnant with their second child. Zara's mom is Princess Anne, the Queen's second child and only daughter. The Tindalls also have a 3-year-old daughter Mia, who frequently steals the show at events.

The happy pregnancy news come just one year after Zara revealed that she had suffered a miscarriage days before Christmas in 2016.

“The saving grace for us has been Mia, our daughter who is now 3,” Mike told The Sunday Times last May.

“However down we feel she will come running up in our faces. When I was playing I hardly saw her; now we can see her grow up. I can take her swimming and I can take her to Ninja Tots. You’ll never be able to see her there because she disappears in a puff of smoke.”

It sounds like Kate Middleton's third baby (due this April) will soon have another playmate. 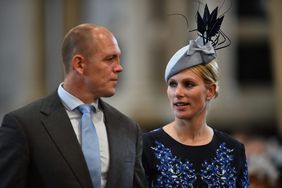