As 2017 comes to a close, the victims of the Manchester terror attack and London’s Grenfell Tower fire are in Queen Elizabeth’s thoughts this holiday season.

On Monday, the long-reigning monarch broadcasted her 60th annual Christmas address, and took a moment to remember those impacted by the country’s most devastating tragedies this year while also applauding the survivors's resilience.

“This Christmas, I think of London and Manchester, whose powerful identities shone through over the past twelve months in the face of appalling attacks,” she said, referencing the victims of the Manchester bombing, as well as the Westminster Bridge attack in March and the Borough Market killings this summer.

“In Manchester, those targeted included children who had gone to see their favorite singer. A few days after the bombing, I had the privilege of meeting some of the young survivors and their parents,” the queen continued. “I describe that hospital visit as a 'privilege' because the patients I met were an example to us all, showing extraordinary bravery and resilience."

On a lighter note, the queen also reflected on her relationship with the Duke of Edinburgh after the couple celebrated their 70th wedding anniversary this year.

”I don't know that anyone had invented the term 'platinum' for a 70th wedding anniversary when I was born," she jokingly quipped. "You weren't expected to be around that long.”

Though, Philip officially stepped down from his royal duties this past summer, the queen assured viewers that his support for the country hasn't waned. "Even Prince Philip has decided it's time to slow down a little having, as he economically put it, ‘done his bit,’” she concluded. “But I know his support and unique sense of humor will remain as strong as ever." 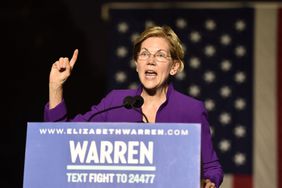