Priyanka Chopra and Nick Jonas Solidify Couple Status as They Arrive Together in N.Y.C.

Priyanka Chopra and Nick Jonas may not have outright confirmed their relationship, but as the saying goes, "actions speak louder than words."

The duo was spotted arriving together in New York City on Friday, and they looked very in sync as they made their way through JFK airport. Both Jonas and Chopra fueled up with Starbucks as they tried to keep it incognito in shades. However, there's no way anyone could have missed the Quantico star's stylish traveling ensemble.

Chopra looked gorgeous in billowy high-waisted pink trousers and a coordinating knit crop top, which she paired with white peep-toe heels. As if her ensemble wasn't chic enough, she casually draped a white blazer over her shoulders while carrying a yellow snake-skin Tod's bag. Jonas didn't look too bad himself, wearing a laid-back look consisting of black pants, a T-shirt, denim jacket, baseball cap, and slip-on sneakers.

Rumors started swirling that they were dating after Memorial Day Weekend. They were seen hanging out together and looking super cozy throughout the weekend, and their romance hasn't slowed down.

On Monday, Jonas left a sweet comment one a photo Chopra shared of her and her friends about to dig in at In-N-Out. "Sweet smile," he posted in the comment section, causing fans to freak out.

She reciprocated the Instagram flirting on Wednesday commenting on a video Jonas shared with a koala bear. "Who is cuter," Chopra wrote along with a laughing emoji. 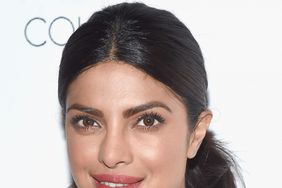 Priyanka Chopra Hails a Cab in the Most Glamorous Way Possible