Some of Princess Diana’s most famous outfits as a royal were designed by Chanel, but after her divorce, she could no longer bring herself to wear the brand in public for a reason that really had nothing to do with the fashion house itself. Instead, it was more about her failed relationship with Prince Charles and the woman who came between them.

Australian designer Jayson Brundson revealed the tidbit in an interview with Harper’s Bazaar U.K. when he recalled the time he met Princess Di during her post-divorce visit to Australia in 1996. “I was very good friends with Joh Bailey and Joh was appointed her hairdresser while she was here on the visit,” Jayson said.

Once her hair was done, Diana went to get ready for a hospital visit in a cream Versace skirt suit, but didn’t know what accessories to pair with the outfit. Joh put his friend on the spot, telling Princess Di that Jayson was great at styling outfits, and before long Diana was showing him every one of the accessories she brought on the trip.

“She went back to her bedroom and she came out holding like handfuls of shoes and bags and just dumped them all down on the couch. Then she said, ‘What do you think?’ So I went through them all and I found a pair of Chanel shoes, and I said, ‘Well these would look great with the Versace.’ And she said, ‘No, I can't wear linked C’s, the double C.’”

“So I asked why, and she said, ‘It’s Camilla and Charles,’” he said, revealing the heartbreaking reason she swore off the brand after splitting from Prince Charles. “It was definitely the timing, it being post-divorce. She would have seen linked C’s and they would have just reminded her of Charles and Camilla.

"The shoes were quite boldly Chanel, I think they had gold linked C’s on them. And I think for photo optics, people would have honed in on that considering it was so fresh after the divorce as well,” he continued.

Also in the interview, Jayson also opened up about what it was like working with one of the most famous women in the world.

“Joh started doing her hair and chatting, I was just there holding a brush and thinking, ‘Oh my god, I’m touching the hair of Princess Diana,’ completely star struck," he said. "And she was on the phone to Madonna, as you do, and I think they were talking about divorce.”

Royal divorce, phone calls to Madonna and Chanel drama? What a time it must have been. 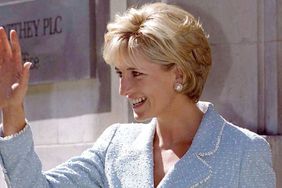