Prince William Gets Real About Cyberbullying

It's back to work for Kate and William, who spent last night celebrating Prince Charles's 70th birthday. And as the Duke and Duchess of Cambridge got back to their royal duties, they spotlighted a newer cause for the royal family: cyberbullying. According to The Guardian, Kate and William were out to spotlight William’s Taskforce on the Prevention of Cyberbullying, an initiative that William established in 2016 to support young people and their families in the fight against online bullying.

During an appearance at the BBC Broadcasting House in London, William stated his disappointment with the current state of affairs online, noting that big tech companies can be doing so much more. Instead of innovating, however, he said that they seem to be falling behind malicious forces on the internet.

“Technology companies still have a great deal to learn about the responsibilities that come with significant power,” William said. "On every challenge they face — fake news, extremism, polarization, hate speech, trolling, mental health, privacy, and bullying — our tech leaders seem to be on the back foot."

It wasn't all bad news, however. William commended tech companies for providing a way for friends and family to connect to one another, offering up information and knowledge, and other positive aspects of social media. He didn't name any specific companies, but he did call for a stronger stance on the intolerance and cruelty that can be a feature of many platforms.

After the appearance at the BBC, Kate and William met with a group of young people who created videos for the Stop, Speak, Support program, People reports. The campaign supports a code of conduct that outlines what to do when people witness bullying online. They also met with the families helping the BBC develop the Kids Online Wellbeing app, which supports the anti-bullying initiatives as well as the royal family's dedication to helping mental health become a higher priority for people everywhere. 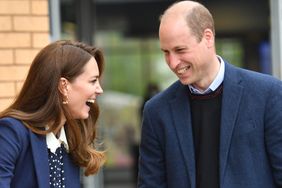