After 65 years of service, Britain's Prince Philip, Duke of Edinburgh, attended his last official engagement at the age of 96.

Ahead of his retirement, the duke attended the Royal Marines' parade Wednesday at Buckingham Palace, where he met with troops who participated in the Royal Marines Global 1664 Challenge. During the challenge, which kicked off April 24 and wrapped up Aug. 2, Royal Marines from around the world took part in various events (such as one company running 10,000 kilometers over the course of 20 days) to fundraise for the Royal Marines Charity.

During the festivities, the Prince Philip took the royal salute and met veterans and members of the Royal Marine's Association—of which he has been honorary president since 1948.

He was also met with cheers as he was handed the Challenge baton. Watch footage from the event here:

Philip's wife, Queen Elizabeth, wasn't in attendance due to a prior commitment, but this won't be the last opportunity to see Philip by her side. While the duke will no longer undertake royal engagements on his own, he still may attend events with her in the future from time to time, the Palace confirmed.

During Philip's years of service, he completed 22,219 solo engagements and made 637 solo overseas visits since 1952, according to Buckingham Palace. He has also authored 14 books, has given 5,496 speeches, and served as patron to 785 organizations.

Once he retires, Philip is expected to spend more time at Windsor Castle, according to the Palace. 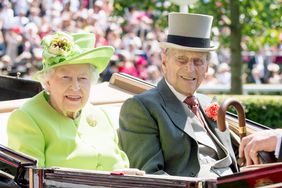