Harry flew commercial and carried his own luggage.

Prince Harry is headed to reunite with Meghan Markle and Baby Archie.

The Duke of Sussex touched down in Canada on Monday night, landing at Victoria International Airport around 10 PM local time. He donned a black puffer coat and navy beanie as he exited the commercial flight and made his way to an SUV, escorted by security guards. He carried his own luggage, however.

Harry made his way north following royal business in London at the UK-Africa Investment Summit. There, he met with British Prime Minister Boris Johnson and African leaders, as the group worked to promote investment opportunities across Africa.

Ahead of getting back to his official business, Harry had shared thoughts on his "sadness" about stepping away from his royal role.

"Once Meghan and I were married, we were excited, we were hopeful, and we were here to serve," Harry told supporters of his Sentebale charity organization on Sunday (January 19).

"The decision that I have made for my wife and I to step back, is not one I made lightly," he continued. "It was so many months of talks after so many years of challenges. And I know I haven’t always gotten it right, but as far as this goes, there really was no other option. What I want to make clear is we’re not walking away, and we certainly aren’t walking away from you."

Now that Harry is in Canada, he can join up with his family to begin their new lives outside of their royal duties. There's no indication just yet what the Sussexes will get up to first, but it's likely both Meghan and Archie are thrilled to be back with Harry once more. 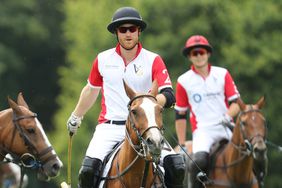