Official duties don't wait for anything.

Prince Harry and Meghan Markle may have just finalized the details of their royal exit, but Harry isn't taking any time off from resuming some of his official duties.

Harry took some time out on Monday (January 20) to meet with leaders at the UK-Africa Investment Summit in London. He spoke with HE President Filipe Nyusi, the president of Mozambique, HE Arthur Peter Mutharika, president of Malawi, and HE Saadeddine Othmani, the prime minister of Morocco. He also spoke to British Prime Minister Boris Johnson while attending during a private meeting.

The leaders met with Harry in an effort to promote investment opportunities across Africa, specifically the UK's role in supporting economic development there.

Harry's dedication to his official duties didn't take any time off, despite the somewhat confusing nature of the royal family's communications over the past few weeks.

The meetings came following a rather tumultuous weekend in terms of royal news, during which Harry spoke up about his "sadness" when it comes to stepping back from his royal roles.

"Once Meghan and I were married, we were excited, we were hopeful, and we were here to serve," Harry opened up during a meeting with charity supporters of his Sentebale organization on Sunday (January 19).

"The decision that I have made for my wife and I to step back, is not one I made lightly," he continued. "It was so many months of talks after so many years of challenges. And I know I haven’t always gotten it right, but as far as this goes, there really was no other option. What I want to make clear is we’re not walking away, and we certainly aren’t walking away from you."

Harry reportedly isn't the only member of the royal family who's down about the whole thing, though. While Queen Elizabeth is reportedly dealing with the step-down agreement just fine, she's not so chuffed about having to spend less time with Harry and Meghan's son, baby Archie.

The Sunday Times reports that the Queen is "very sad" that Archie will grow up primarily outside of the UK, as they haven't seen much of each other since he was born.

"She will be very sad to have barely seen Archie and that he will miss out on growing up with his cousins and wider family," a source offered.

This new arrangement for Harry and Meghan (and little Archie) will undoubtedly be difficult for some members of the royal family at first, but as Harry proved by getting on with his official duties, things will eventually get back to "normal" in the end. 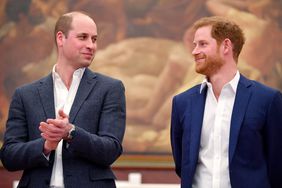