He feels "deeply connected to this place and to Africa."

While Meghan Markle and baby Archie stay on course for their royal tour in South Africa, Prince Harry is leaving his family behind for a bit of solo travel.

Harry arrived in Botswana on the fourth day of his royal tour, as Meghan stayed behind in Cape Town with baby Archie. He plans to continue exploring throughout areas like Angola and Malawi, then will eventually meet back up with his wife and 5-month-old son to continue traveling together. Currently, the tour schedule has Harry reuniting with Meghan and Archie in Johannesburg, South Africa to round out their whirlwind visit.

Harry's first stop in Botswana began with a visit to the Chobe Forest Reserve, where he helped children there plant seeds that would eventually grow into beautiful trees as part of the kids' educational curriculum on ecosystems.

The Duke of Sussex charted a course for his charity Sentebale as well, where he worked alongside members of the Sentebale Let Youth Lead group during a camp activity meant to help offer support and guidance for youths in the area living with HIV. Sentebale was created in a bid to help organize funds and spread awareness of younger members of the community affected by HIV in tandem with Princes Seeiso.

Harry also made a stop at Chobe National Park, where he helped dedicate one area fo the forest to the Queen's Commonwealth Canopy. The Commonwealth is an initiative that began in 2015 as a network of forest conservation programs. It's located near the border of Zambia, Zimbabwe, and Namibia, and is used as a way to help bring areas of the Canopy together across borders in an effort to make it easier to extend the range of wildlife habitats.

Baby Archie Just Made His Royal Tour Debut, and There Are So Many Photos

While visiting Botswana, Harry spoke briefly on its importance to him, as he has been traveling to the country for the past 15 years following the passing of his mother Princess Diana.

"Fifteen years I've been coming here, it's a sense of escapism — a real sense of purpose ... have some of my closest friends here over the years," he said after arriving by the banks of the Chobe River. "I came here in 1997 or 1998 straight after my mum died, so it was a nice place to get away from it all."

The Prince indicated that, as such, he felt "deeply connected to this place and to Africa." 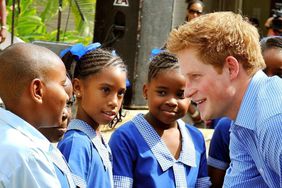