After making his list and checking it twice, Santa Claus is coming to the British royal household with plenty of presents for Prince George and Princess Charlotte in tow, and it looks like he's upgraded regular wrapping paper for the two tots.

Prince William and Kate Middleton decided to add an extra special surprise to their kids' Christmas morning in the form of too-cute burlap Harrow & Green bags from Brit retailer Selfridges, modeled after Santa's classic gift sack. The brown-and-red lettering on the giant two-and-a-half foot bags reads, "Special delivery mail. Please deliver the enclosed Christmas presents to [Name]. Reindeer Delivery: 25th December," and as with everything the Duchess of Cambridge purchases, the sacks are already sold out.

The Royal family has reportedly been getting into the holiday spirit a little early, with Prince William recently revealing that a very excited George is already tearing into this year's presents!

Something tells us that the toddlers will have an extra-hard time waiting until Christmas morning with these adorable parcels! The Many (Adorable) Angles of Prince George of Cambridge

The royal family released their annual Christmas card, and Prince George looks like his dad William's mini-me in a buttoned shirt and navy shorts. Twitter/KensingtonRoyal

The young royal looked studious in his new uniform upon arriving for his first day of school. Rhchard Pohle/AFP/Getty Images

The little guy looked sleepy upon arriving in Berlin for the next part of his royal tour, but he still flashed a smile to photographers. DMC/Getty

Prince George couldn't look happier while getting to climb up into a helicopter for a tour at the Hamburg Airport. Chris Jackson/Getty

The prince has a mischievous look on his face upon landing in Poland for his first royal tour of the country. Chris Jackson/Getty

George looked none too pleased during the annual Trooping the Colour parade and made a slew of hilarious faces on the balcony. Mark Cuthbert/UK Press via Getty

The 3-year-old and his sister Charlotte wreaked some havoc at Aunt Pippa's wedding in May, getting a stern talking-to from mom Kate Middleton. Max Mumby/Indigo/Getty

George waved to the cameras from the backseat as he departed from Pippa's wedding. Justin Tallis/AFP/Getty

The prince enjoyed a candy cane at church on Christmas Day. Samir Hussein/WireImage

Prince George waved goodbye to his Canadian friends as he left the country to go back home after the Royal tour. Andrew Milligan - Pool/Getty

As the young prince departed Canada, he pressed his face up to the window to get one final look of the country from above. Samir Hussein/Pool/WireImage

The adorable 3-year-old played with bubbles at a party celebrating children of military families during the Royal family's visit to Canada. Chris Jackson/Getty Images

George grabs his dad, Prince William, in a baby bear hug while at the party for children of military families. Chris Jackson - Pool/Getty

In honor of Prince George's third birthday, the royal family released an adorable new set of photos of the little guy at his idyllic family home in Norfolk, England. In one snap, George takes a snack break with the family dog, Lupo, while sitting out on a plaid blanket on the grass. UPPA via ZUMA Press

Image zoom Prince George Takes a Seat in a Helicopter

The 2-year-old accompanied parents, Kate Middleton and Prince William, on his first official royal engagement to check out the helicopters at the Royal International Air Tattoo in Gloucestershire, England. Every little boy's dream! Chris Jackson/Getty

Prince George posed for photos before his first day at Westacre Montessori School nursery in Norfolk. As usual, he looked adorable in a quilted navy blue jacket with brown elbow patches and a new light blue backpack. The British Monarchy/Facebook

Like so many families around the world, Britain's royal family takes holiday photos. But with Princess Charlotte and Prince George in the mix this year, the cuteness factor of Prince William and Kate Middleton's latest snap is off the charts. Chris Jelf/Kensington Palace/Getty Images

Ahead of his second birthday, Prince George's mum and dad released this photo of him grinning ear-to-ear after his sister's christening. Facebook/The British Monarchy

After Princess Charlotte's christening at St. Mary Magdalene Church in Sandringham, Prince George acted like the adorable big brother that he is and checked up on his little sister. Matt Dunham - WPA Pool/Getty Images

Taken by mom, the Duchess of Cambridge, Prince George smiles big as he embraces his baby sister in one of their first official portraits together. Twitter/@KensingtonRoyal

At dad's polo match at the Beaufort Polo Club in Tetbury, England, Prince George had a blast playing and dancing with mom on the sidelines. Max Mumby/Indigo/Getty Images

Image zoom Prince George Attends the Trooping of the Colour

Elevated in the arms of dad, Prince George waves to the crowd from the Balcony of Buckingham Palace in honor of his great-grandmother, Queen Elizabeth. Chris Jackson/Getty Images

On his way into the hospital to meet his new little sister for the first time, he gets a kiss from dad—aww! Anwar Hussein/WireImage

Just days before his first birthday on July 22, the palace released this photo of the little prince toddling around at a butterfly exhibit at London's Natural History Museum. John Stillwell - WPA Pool /Getty

Dad may have been playing on the field during the Jerudong Polo Trophy match, but Prince George wasn't far behind! In the safety of his mother's grasp, he showed off his crawling skills. James Whatling / Splash News

George became quite the baby trendsetter. How cute was he in his little red cardigan and gingham shorts? Chris Jackson/Getty Images

It was a meeting of the two Georges at the Taronga Zoo in Sydney, Australia! The little prince was introduced to the nocturnal marsupial, who was named after him soon after his birth. Chris Jackson/Getty Images

Image zoom Prince George Gets a Kiss from Dad

Be still our beating hearts: Prince William plants a smooch on his son's head, and it's the epitome of adorable. Chris Jackson/Getty Images

Image zoom Prince George Practices Diplomacy He's a natural! Prince George shakes the hand of one of his many admirers. Samir Hussein/WireImage

Image zoom Prince George Pets a Wombat The little prince has a new friend! He's gifted with a stuffed wombat, and his happy expression says it all. David Foote /Admiralty House via Getty Images

Image zoom Prince George Has a Moment with Mom The look of love: The Duchess of Cambridge coos at her 8-month-old son and he stares back at her adoringly. Marty Melville-Pool/Getty Images

Image zoom Prince George Waves to the Crowd It looks like Prince George already has the hang of the official royal wave! Danny Martindale/WireImage

Image zoom Prince George Looks at Lupo Let's all say it together: "Aww!" In this official family portrait, shot by Jason Bell, the young royal family poses in one of the windows at Kensington Palace. Getty Images

Image zoom Prince George Snoozes In their first official photo as a family (taken by Kate's dad, Michael Middleton), they pose informally in the garden of the Middleton family home in Bucklebury. Handout via Reuters 1 of 45 Advertisement 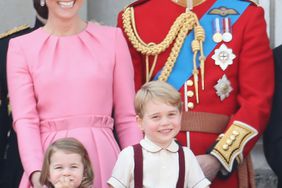 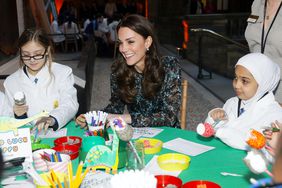 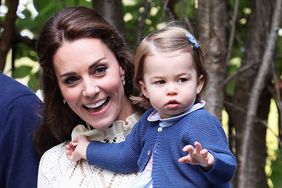 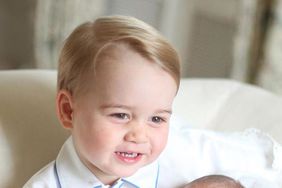 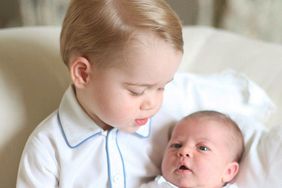 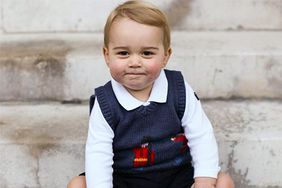