The Grammys may be music's biggest night, but despite the show's attempt at more inclusive and diverse program, male artists dominated the evening. Only one out of nine of the major prizes went to a female artist, causing #GrammysSoMale to trend on Twitter.

In response to the backlash, Recording Academy president Neil Portnow spoke to Variety, telling the outlet that women need to "step up" if they want to win the big awards. Needless to say, this didn't go over so well.

After seeing his comments, Pink—who, by the way, delivered a killer performance during last night's show—shared her response on Twitter, posting a handwritten note with her thoughts.

Pink’s Daughter Willow Met Rihanna at the Grammys, and She Couldn’t Be Happier

"Women in music don't need to 'step up'—women have been stepping since the beginning of time. Stepping up, and also stepping aside," Pink wrote. "Women owned music this year. They've been killing it. And every year before this."

"When we celebrate and honor the talent and accomplishments of women, and how much women step up every year, against all odds, we show the next generation of women and girls and boys and men what it means to be equal and what it looks like to be fair." 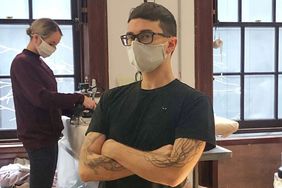