Pink and Gwyneth Paltrow turned heads in blue and white monochromatic looks on the red carpet for the premiere of their upcoming film, Thanks for Sharing, at the ArcLight Cinemas in Hollywood. Pink chose a blue off-the-shoulder gown, while Paltrow wore a white flared Lanvin dress. In the romantic comedy, Paltrow dates Mark Ruffalo, who -- along with Pink, Tim Robbins, and Josh Gad -- play treatment-seeking sex addicts who join a support group and help each other deal with the challenges of recovery. The film opens in theaters nationwide September 20.

Plus, see more stars from this week's parties! 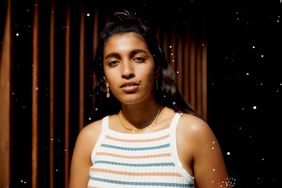