Picture This: Zac Efron Rolling in the Dirt for His New Film At Any Price

Zac Efron's newest film At Any Price hits a theater near you today—and get ready to feast your eyes on a different side of the heartthrob. The film is a modern reinterpretation of Death of a Salesman, in which Efron plays Dean Whipple, the son of a farmer (played by Dennis Quaid) in a rural Iowan town who rebels by taking up a love for race car driving. Dean races on dirt figure-8 tracks, which meant Efron's wardrobe required a bit of roughing up before stepping into the zone. "We would find old racing T-shirts for me at Goodwill, thrift shops, people’s closets, or we just went to the real races and saw what guys were wearing and just borrowed their clothes, then I would go roll around in the dirt and mud," Efron told InStyle.com at a New York screening of the film. "I'd just wear ‘em over the weekend and go try to work on cars and stuff like that." Now isn't that a sight worth imagining? Click here to find out where At Any Price is playing near you. 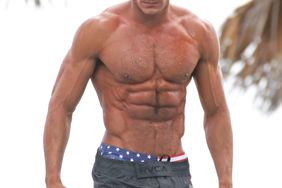