And the #shoegate controversy continues!

Earlier this week reports surfaced that a group of middle aged women were turned away simply for wearing flats and now, demands are being made that the Cannes Film Festival put a stop to their sexist dress code with a new petition circulating.

As soon as the news broke, the hashtag #showmeyourflats started trending and many celebs have voiced their opinions about the obscure rules, which fail to even mention a heel height requirement. Natalie Portman commented to the BBC saying, "Women should be able to wear whichever suits them." Model Cara Delevingne chimed in, "I'm gonna wear flats now, for that reason. Are you kidding me?"

It's definitely not a joke. The Care2 petition is demanding the Cannes Film Festival to publicly clarify their red carpet and screening dress code. Protect your right to wear flats by signing the petition here.

PHOTOS: The Best of the 2015 Cannes Film Festival Red Carpet 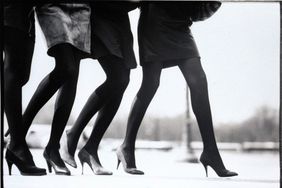