Before Proposing to Ariana Grande, Pete Davidson Confided In This Unexpected Celebrity

Ariana Grande has Camila Cabello—but who’s fiancé Pete Davidson’s celebrity confidante? Uh, that would be none other than fellow champion of lightning-fast engagements: Nick Cannon.

The actor, who wed his singer-ex Mariah Carey just weeks after meeting in 2008 (they later divorced in 2016), revealed that the SNL star called him ahead of his proposal to Grande.

"He called before he was going to do it, and I said, 'Salud!'" Cannon told Entertainment Tonight on Thursday. "He was really excited, so I was like, 'I love it, man. Keep it going.' Love is in the air!"

And no, Davidson (probably) didn’t just ring up every celebrity on his contact list—he and the Wild ‘n Out star go way back.

“A lot of people don't know Pete Davidson is someone I introduced to entertainment," Cannon explained. "I used to have a radio show in NYC in the mornings and this kid called in one day, 15 years old and said, 'I want to open up for you doing stand-up.' I was like, 'Yeah, all right, tell me a joke.' He told me a joke and I was like, 'This kid is pretty funny'... I took him on the road with me. Unbeknownst to me, even at that time, I didn't know about his history, that his father passed away on 9/11 and then just watched this young man have all of this weight on his shoulders and then just become this outstanding, hilarious young individual."

Canon added of the couple, "I think they're outstanding ... They're young people in love and you can't knock that. It's like The Notebook.”

"I'm up for all weddings,” he continued, serving up a generous offer: “I'll officiate. I don't know how long they'll last if you let me do it, but I'm up for it."

"I don't think [there's such thing as too soon]," Cannon said of relationship milestones. "But I'm a hopeless romantic, or as I say, a fearless romantic. I just like to jump into it, and sometimes it can get you in trouble, but it makes for some great stories."

P.S. Pete, Ariana: Please allow Nick Cannon to officiate your wedding. That is all. 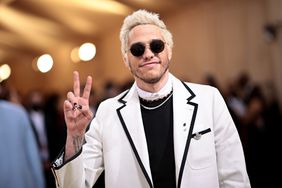