Pete Davidson Finally Talks About His Engagement to Ariana Grande

Pete Davidson appeared on The Tonight Show Starring Jimmy Fallon on Wednesday to promote his new Netflix film Set It Up, but, uh, things went a little off the rails …

Skirting the norm, Davidson, a regular cast member on Saturday Night Live, took the majority of his time on the talk show to promote a different movie—one that came out last year (that he isn’t in): Good Time.

The film’s star, Robert Pattinson, also came on the show (to promote upcoming western Damsel), shyly standing by as Davidson shared his glowing review of the “best movie ever made.”

Of course, Davidson isn’t making headlines for his reviews of year-old movies. The SNL star recently got engaged to singer Ariana Grande—news he confirmed during his appearance.

“You know you didn’t have to get engaged to Ariana Grande to come on our show …” Fallon prompted, to which Pete interjected, “But I did though.”

“I feel like I won a contest,” he said of the engagement. “It’s f—king lit, Jimmy. It’s so funny walking down the street, ‘cause dudes will walk by and they’re like [tips cap]. Some dude came up to me and he was like, ‘Yo, man, you gave me hope.’ I’m like, I didn’t realize I was that ugly—Jesus. I’m a lucky motherf—ker,” he told the host.

The level of publicity following Pete Davidson over the past weeks is a far cry from that of a typical SNL cast member. “I’m forever known as her plus-one,” Davidson joked.

Pointing out one of Pete’s Ariana-inspired tattoos, Jimmy noted that he first saw his fresh ink on the news. “Apparently when I take a s—t it’s news,” Pete responded, poking fun at the media firestorm that is Grandison.

Everything We Know About Ariana Grande's Engagement Ring

After dropping several F-bombs, Fallon chastised the fellow NBC entertainer for swearing repeatedly on the show.

“You asked me to be on here,” Davidson countered. “I don’t do these things very much—this is why. I can get fired from [SNL for swearing]—I can’t get fired from your show.” 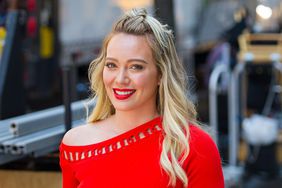