Of all the soul-crushing moments on Sex and the City, none is more upsetting than when Carrie loses her beloved nameplate necklace. Though in her words "it costs, like, nothing," it remains priceless because it was acquired while shopping with her best girlfriends and symbolizes her single-girl halcyon days in N.Y.C. Considering that scripted necklaces have experienced a resurgence in popularity, when we bumped into the show's legendary costume designer, Patricia Fields, at Coachella, we were compelled to ask her the back-story on the much-discussed piece of jewelry.

"I have a shop in New York City, and a lot of the kids in the neighborhood wore them," Field tells InStyle of the blingy monogram pieces. "I thought, 'Maybe I’ll show it to Sarah Jessica and she’ll like the idea.' She did, and she made it happen. It became a universal, long-lasting thing." That's a bit of an understatement.

But did she foresee its colossal appeal and significance in the series? "After it became what it became, I understood the draw," she adds. "I think there’s a trend now toward smaller pieces, and the name necklace fits within that genre. Names are timeless. Every woman has one: young, old, short, or tall." Well put. 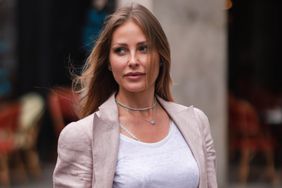