Saoirse Ronan (in Lanvin) and Diane Kruger (in Thakoon) debuted their new movie The Host last night at the premiere held at the ArcLight Hollywood in Los Angeles. The film (open March 29) is adapted from Twilight author Stephenie Meyer’s novel, which centers on Ronan’s character Melanie, a young girl who refuses to give up her mind to enemies who want to use human bodies as their hosts. And there's a romantic element as well: "There's a lot of kissing with co-stars Max Irons and Jake Abel, which sounds a bit sleazy, but it's only because I'm playing two characters," she told InStyle. "At least that's the excuse I'm going with." See more photos from last night's hottest parties in the gallery. 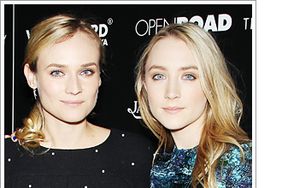