On the subject of men whose past behavior warrants reexamining in this new era of accountability in Hollywood, there’s one who may be due for a reckoning of a different sort. That would be the man known professionally as Mr. Blackwell.

For nearly 50 years, until his death in 2008, Richard Blackwell—a former eveningwear designer and onetime actor who became famous as an acerbic critic of fashion—published a satiric worst-dressed list that skewered women in harsh terms. He called Barbra Streisand “a masculine Bride of Frankenstein” and once said Meryl Streep looked like “a gypsy abandoned by a caravan,” to give you some idea of insults that, at the time, were treated as harmless dish. “I merely said out loud what others were whispering,” Mr. Blackwell said, arguing that it wasn’t his intention to hurt anyone’s feelings, just “to put down the clothing they’re wearing.”

But in many ways Mr. Blackwell and his colorful quips were precursors to a culture of red-carpet cattiness that flourished over the decades. From the late Joan Rivers and the Fashion Police to gimmicks like the Mani Cam and Glambot, the pageantry of awards season has turned into a form of blood sport. For years there have been protests and plenty of pushback against the inherent sexism of judging women (but rarely men) for their looks, yet very little has changed. Until now.

Red-carpet commentary, particularly on television, has become markedly more respectful, both in tone and content, in the months since explosive allegations of sexual harassment led to the formation shortly thereafter of the Time’s Up initiative, which seeks to fight systemic abuses in Hollywood and beyond. The magnificent scale of this movement was rendered in a dramatically visual way at the Golden Globes, where almost every guest wore black as a statement of solidarity, and—for at least one night—it was considered poor taste for the media to ask who made the dresses. The action was so successful that now many people are wondering whether there will be a permanent shift toward the view of those who have demanded substantial coverage of women, using #AskHerMore as a rallying cry on social media. It hardly seems a coincidence that the E! network broadcast its final episode of Fashion Police in November with a tribute to Rivers, whose acid tongue could find no worthy successor.

This story has only become more complicated in recent weeks since Ryan Seacrest, who has long been a more sober foil to E!’s fashion minstrels, was himself accused of sexual harassment by the stylist Suzie Hardy. While Seacrest has denied the allegations, and his lawyers have said he was cleared of wrongdoing by NBCUniversal, the network’s parent company, his role in Sunday’s red carpet remained in question as of press time. His appearance as a host has raised concerns of how conversations about harassment would be perceived.

A more genteel discussion of gowns and jewels may seem a small victory considering the broader battle ahead, and beside the point to the hundreds of actors, producers, and other executives who created Time’s Up. “This is not about changing red-carpet etiquette,” Eva Longoria says. “The change we want is gender equality across all industries.” But many designers and jewelers have mixed feelings about what may be the death knell of their favorite question: Who are you wearing?

“We are all wondering how to continue the cause without hurting a fashion designer,” says the stylist Elizabeth Saltzman, whose clients include Gwyneth Paltrow and Saoirse Ronan. Saltzman, who lives in London, says she was delighted when organizers of the British Academy Film Awards in February announced they would also encourage an all-black dress code to show support for Time’s Up, and she welcomed the opportunity to promote equality. But she also noted that designers rely on the publicity of the awards shows to justify the expense of producing lavish gowns. And it is human nature for viewers to react to them, whether positively or negatively.

“Fashion should have a voice,” she says. “Fashion is a business. Fashion is money. Fashion provides jobs. I always say we are so lucky that we get to use our voices and that I’m not in a prison being told I can only wear this one thing.”

Over the past 20 years, the appropriateness of talking about fashion on the carpet seems to have swung like a pendulum, with world events involving terrorism, war, and the economic crash of 2008 pushing the conversation away from designer dresses. But, eventually, the urge to revel in the superficial reasserts itself, as in 2010, for example, when The New York Times published an article tweaking Seacrest with the headline “Hey, Ryan, Talk to the Dress.” In fact, the E! network’s format for Live from the Red Carpet has often changed with the times.

“We’re always cognizant of what is happening in the world, and we’re aware that the climate is changing,” says Jennifer Neal, executive vice president of marketing and executive producer of live events at E!

Sophia Bush on the Golden Globes Blackout: "Women at Awards Shows Have a Platform"

In January the Golden Globes required a unique approach from its hosts, Seacrest and Giuliana Rancic, who encouraged conversations about the issues by asking celebrities why they were wearing black. Going forward, Neal says, the priorities will be to celebrate the stars for their accomplishments and to highlight their passions, projects, and causes. But the audience, the majority of whom are women, is diverse and not necessarily looking to E! for just one thing.

“Fashion is an important part of the balanced stories we tell our viewers,” Neal says. Dresses remained mostly off-limits at the SAG Awards, on January 21. But at the Grammys, on January 28, Rancic dipped a toe back into the style waters. Designers are particularly anxious to hear their dresses credited on live television at the Oscars, given the enormous scope of the global audience, but the Seacrest allegations could potentially bump them further out of the spotlight. Page Six reported this week that many top publicists plan to steer their clients away from him.

For on-air talents, finding the right mix of style and substance is not so easy, and they are often critiqued for their performances just as harshly as the stars and their dresses. “There is a new level of trying to be super-respectful,” says Brad Goreski, the stylist and frequent red-carpet personality. “If Fashion Police were on right now, it would be a tricky world to navigate, because it’s not really the time for that. People are still trying to carry on the traditions of best- and worst-dressed lists, but they’re also acknowledging that there is a greater movement happening at the same time. I think this moment will go down in history.”

In some ways, though, women have been using fashion as a form of protest at the Oscars since the beginning. In 1935 Claudette Colbert was trying to flee Los Angeles when she was summoned to the ceremony to collect her best actress prize and showed up still wearing her Travis Banton traveling suit. The following year Bette Davis wore a plain costume from her role in Housewife. Cher’s famous Bob Mackie dress and Mohawk from 1986 were a deliberate rebuttal to a memo sent to nominees and presenters by Nolan Miller, the Oscars’ fashion consultant, urging them to “look like a movie star.”

“As you can see,” Cher said from the stage, “I did receive my Academy booklet on how to dress like a serious actress.”

“Women have always been at the mercy of studio moguls in Hollywood,” says Bronwyn Cosgrave, the author of Made for Each Other: Fashion and the Academy Awards. “The Oscars were viewed as this male clubhouse where all these fat cats got together, smoked cigars, and celebrated their box-office takings. The women who were nominated had no intention of socializing with them. Luise Rainer told me she was off with her boyfriend having a vacation when she won, so she turned up in her housedress.”

In more recent times many actresses have forged alliances with luxury brands as a lucrative source of income, some of them involving multimillion-dollar contracts. While critics sniff at the practice, such deals can far exceed what actresses make for a film role, especially compared with their male co-stars. “They can then pick and choose their roles more carefully,” Cosgrave says. “They can do that indie movie that will up their cred or do a Broadway show and not worry about their bank balance.” But Cosgrave also feels that style has suffered as a result, with too few actresses able to take chances or express more personality.

The critique-free zone of the Globes, she says, was a breath of fresh air, but no one really believes the silence will last forever. “Things are going to make you happy, inspired, or even excited,” Saltzman says, “but what I want to see as a stylist is for each person to speak up and be themselves.”

For more stories like this, pick up the April issue of InStyle, available on newsstands and for digital download March 16. 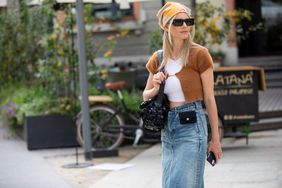 Why 30-Somethings Are the Real Winners of the Y2K Comeback